What will be the Chelsea predicted line up for their clash against Manchester United?

Chelsea are a team who are in transition this season. They were hit with a transfer ban. They have not been able to sign any players in the summer. They have brought on Frank Lampard as head coach. Frank Lampard has taken a new approach at Chelsea. Since he was not able to sign any new players at the club, Frank has had to restore to the club’s youth pool. He got the likes of Tammy Abraham and Mason Mount, Billy Gilmour and Fikayo Tomori their major break in the squad of Chelsea.

Chelsea keep winning one week and losing the next. However, it is only natural for the Blues. They are a young side and are learning every week. They, however, do keep entertaining the fans. Chelsea predicted line up vs Manchester United will be tricky to tell. Lampard has shown that he has trust in youngsters. The boss is ready to mix up the squad and hence Chelsea predicted line up cannot be easily guessed.

In goal, we can expect Kepa to retain his spot in between the posts over Willy Caballero. Kurt Zouma has found some playing time recently but Frank Lampard can return to his centre-back pairing of Antonio Rudiger and Andreas Christensen for this one. Marcos Alonso and Cezar Azpilicueta to cover the wings with Emerson and Reece James kept as backup.

N’Golo Kante could return from injury to man the midfield next to Mason Mount and Matteo Kovacic. Ruben Loftus-Cheek could be brought on from the bench while Billy Gilmour misses out through a knee sprain. Jorginho is likely to be benched once again.

It is a toss-up between Olivier Giroud and Tammy Abraham for this tie at centre-forward. Either could start while Christian Pulisic and Willian are almost guaranteed on the wings. Callum Hudson-Odoi is still getting back to match fitness and Pedro is the best option for the later stages of the game. 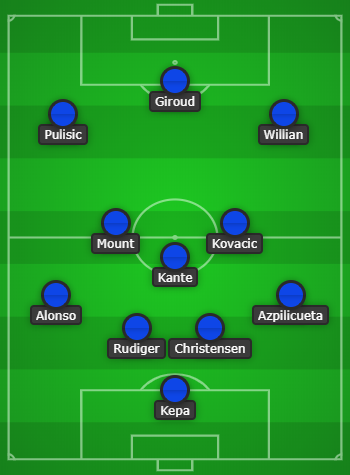 Chelsea take on Manchester United in the FA Cup semi-final tie on Sunday night. This will be the fourth time both sides will meet this season, previous three being in the Premier League and the Carabao Cup fourth round. The Red Devils have claimed victories in all three games and are the favourites for this tie.

Here we will give you answer on the most frequently asked question about Chelsea – Manchester United.

The Blues came back strong since the restart but have dropped their intensity recently. Following a disappointing 3-0 defeat against Sheffield United, they did not look too convincing against a relegated Norwich City.

The Red Devils have been firing on all cylinders these past few weeks. Their attacking lineup has been drilling in goals left and right but this side is still far from perfect, evident from their 2-2 draw against Southampton.

See all Chelsea vs Manchester United Head To Head results.