What will be the Chelsea predicted line up for their clash against Liverpool?

Chelsea Predicted Line Up vs Liverpool

Chelsea players vs Liverpool will be tricky to tell. Thomas Tuchel will have to play his best team against Jurgen Klopp’s men.

In goal, we can expect Mendy to continue. Cesar Azpilicueta, Chalobah and Antonio Rudiger are tipped to form the back three.

Jorginho and N’Golo Kante could form the engine room with Alonso and Hudson Odoi.

In attack, we can expect Kai Havertz and Mason Mount on the wing. Romelu Lukaku will be leading the line from upfront. 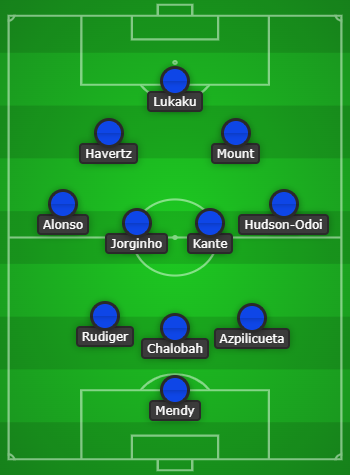 The Blues had a strong start to the campaign but lost momentum in the last two months. Injuries and covid concerns put more pressure on Tuchel.

Liverpool suffered a defeat against Foxes earlier this week and Man City added more gap to the table. Reds will miss their AFCON players so three points are Klopp’s main priority at Stamford Bridge.

Here we will give you an answer to the most frequently asked question about Chelsea – Liverpool.

Reece James and Andreas Christensen had thigh and back issues respectively in the draw with Brighton so they might miss this game.

Ben Chilwell is now confirmed to be undergoing surgery on his ACL problem.

Thiago Silva will also be sidelined, while Ruben Loftus-Cheek is struggling with his ankle problem.

COVID-positive Timo Werner did not return to training before the Brighton draw so he is expected to miss this home game.

As for Liverpool, Andy Robertson serves the suspension following his sending off against Tottenham.

Mohamed Salah, Sadio Mane and Naby Keita are available for this game. It will be the last game for the trio ahead of AFCON 2021.

Takumi Minamino and Thiago Alcantara are still on the injury list.

Head to Head – Chelsea predicted line up vs Liverpool

Ahead of Sunday’s clash between Chelsea and Liverpool, we look at the Chelsea vs Liverpool head to head record 2021 –

Tonight’s match is the 190th meeting between Liverpool and Chelsea. The Blues have won 65 games while the Reds have managed 82 wins for themselves and the other 42 ended as draws.

See all Chelsea vs Liverpool Head To Head results.