What will be the Chelsea predicted line up vs Aston Villa?

Chelsea players vs Aston Villa will be tricky to tell. Thomas Tuchel has picked players very specifically in certain games. He is also a coach who gives most of the squad fair chances.

In goal, we can expect Kepa to start this game. In the back five, Reece James should be at right wing-back with Ben Chilwell as a left wing-back. The centre-backs should be Trevor Chalobah, Thiago Silva and Kalidou Koulibaly.

Jorginho and Kovacic could form the engine room with Raheem Sterling and Mason Mount ahead of them.

Pierre-Emerick Aubameyang could be thrown in at centre-forward. Kai Havertz should be given a breather. 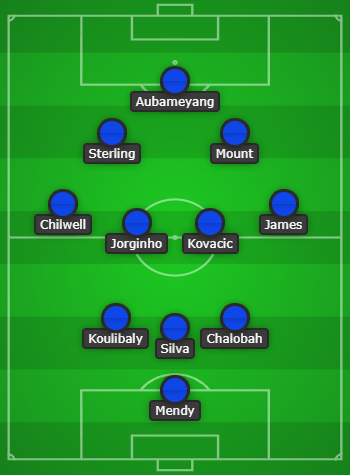 Chelsea takes on Aston Villa in the Premier League clash. The Blues thrashed AC Milan in the previous game and are now fourth in the table.

The Blues secured draws against Crystal Palace and Wolves in the last two weeks and will be looking to gain the top spot in the league table. They looked dominant in the 2-0 win over AC Milan, making a strong claim in the Champions League.

Aston Villa can’t possibly finish any higher. They are simply looking to push the top sides as much as they can.

Potter will be without the services of N’Golo Kante who hasn’t recovered yet from a thigh injury.

Wesley Fofana will be also out with the knee injury he sustained in his last game.

Mateo Kovacic, Mason Mount, Thiago Silva will be called upon for this tie.

As for Aston Villa, they will be without the services of Lucas Digne and Ludwig Augustinsson.

Tonight’s match is the 161st meeting between Chelsea and Aston Villa. The Blues have collected 67 wins while Aston Villa have managed 58 for themselves and the other 35 games ended as draws.