Chelsea have pretty much dominated Premier League transfer window with two blockbuster signings in Timo Werner and Hakim Ziyech. Both players have joined up with the Blues squad to give their fans a flush excitement for the coming season. Not just that, several other names are being lined up by the Stamford Bridge team following a season of transfer bans.

Chelsea will be looking to close the gap to the elites in English football, Manchester City and Liverpool this summer. That means adding more quality and enforcing each of their starting XI positions. Maybe addressing all of their issues in one window will be difficult but they can surely make a strong dent.

Lampard did his job in claiming Champions League qualification and came very close to winning his first trophy as a manager. No matter what their Champions League outcome might be, fans can be optimistic about the new regime. If things did go well; let us think of 5 players who we believe could be ideal to make Chelsea a threat in Europe again.

3. Players Chelsea Could Sign This Summer Is Declan Rice

Declan Rice is a former Chelsea player. Plus he is still really good friends with Mason Mount. West Ham are reportedly open to the fact that he might eventually leave the Hammers but they are determined to hold on to a world-record fee for the club.

Chelsea will want him as he is young, has PL experience and can play in multiple positions. This is one of those transfers that might just come through on deadline day!

Yes, he is definitely one of the best young talents in the Premier League and only going to get better – Chelsea should wrap up his deal before his price increases even more.

According to reports, Chelsea have made Jose Gimenez their top defensive target and within reason. This season that Blues backline has crumbled under the slightest pressure. Adding a player of Gimenez’s pedigree will be a definite upgrade and possibly even get the likes of Antonio Rudiger, Andreas Christensen, Kurt Zouma back to their best and for when Silva leaves.

The Uruguay international has been a constant in that Atletico Madrid defense for some time now. He is one of La Liga’s best defenders – commanding in the box, quick to mark his players and not afraid to put his body on the line. Whether Atletico can be prized out of letting their best center-back leave remains to be seen.

Another position they need strengthening in is the center-back place. Thiago Silva is at best a stop-gap option and while Christensen and Rudiger and Zouma have all been added to the transfer list, there is now the question, who will replace them at the club.

Koulibaly, who is a strong target for Manchester City, is a favorite as well. He is in his prime, is strong, and can play easily at the top level for the next 4-5 years!

The Senegalese do have a hefty release clause at Napoli but given that he has only one year left on his contract, it will be a good move for Chelsea to negotiate the price and get him on board!

Chelsea will also have to sell before they buy.

Giroud wants more game time and could move to a club as he wants to retain his spot in the French national team ahead of the Euro 2020 to be held in the summer.

There is also Jorginho who could be moved on to make way for other players.

They plan to loan out Fikayo Tomori, who needs game time. The duo of Andreas Christensen and Antonio Rudiger it would seem have run down their time at the club. They could be sold in January.

Marcos Alonso has fallen out with Frank and will surely move on in January. As for Emerson, his agent has made it clear that the player could be on his way to Serie A. 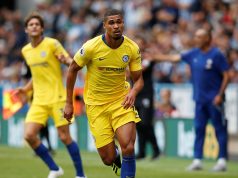 Ruben Loftus-Cheek ready to fight for his place at Chelsea

Ruben Loftus-Cheek ready to fight for his place at Chelsea