Chelsea FC Latest News .com
Home Arsenal Chelsea urged to sign a new striker to keep up with the... 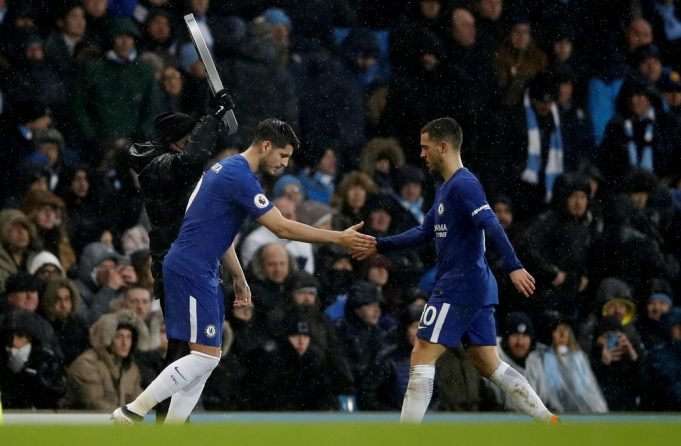 The Blues advised not to rely on Eden Hazard every time

Chelsea had a decent transfer window as they appointed Maurizio Sarri as their new manager after sacking Antonio Conte, whose contract was due to expire next summer.

Sarri raided his former club to sign midfielder Jorginho, Blue’s first signing this summer. They also signed Mateo Kovacic from Real Madrid on a season long loan and Kepa Arrizabalaga from Athletic Bilbao after activating his  €80 million release clause, making him the world’s most expensive goalkeeper.

Though they lost Thibaut Courtois to the Champions League winners but the best business they did was to keep hold of their main man Eden Hazard. He was linked with an exit throughout the summer but on Sunday he confirmed that he will stay with the club and has no intention of leaving.

The Belgium International was influential off the bench against Arsenal on Saturday as he assisted Marcos Alonso’s winner as they edged out Gunners in a 3-2 win. They have now won their first 2 opening game of the season.

But Sunday People chief football writer Bates has urged the London outfit to sign a new striker who can challenge for the Golden boot. He believes their over reliance on Hazard could be a big issue in the future.

He said as quoted by Sky Sports: “If they keep Eden Hazard, and I suspect they will do, because there would be no value in Chelsea selling him now, although you never know after the comments he made earlier in the summer, they’ve got a really, really strong squad.

“The one thing I would say is that Morata is no Diego Costa. Costa gave that Chelsea team so much, I know Morata scored yesterday and it was a good goal, but somewhere further down the line they are going to suffer in attack because they cannot rely on Hazard every time.

“Okay, they’ve got others, Pedro, Willian, Giroud who will weigh in with goals, but longer-term they are going to need a Sergio Aguero, a Harry Kane, someone who will give them 25-30 goals a season. If they did that, I think Chelsea would be a huge, huge force.”