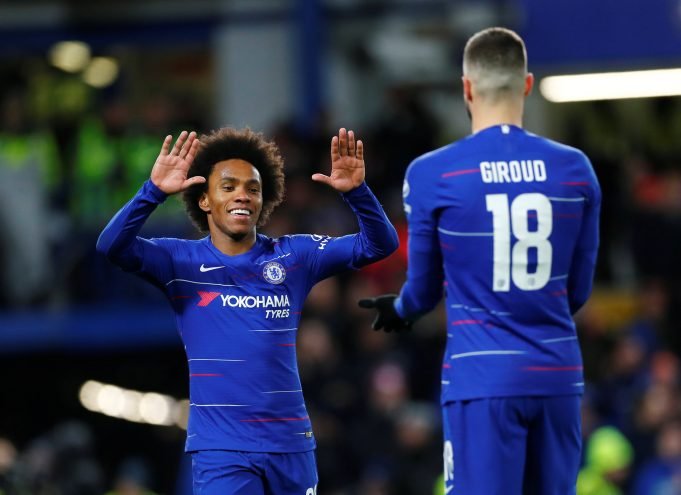 It was claimed that a deadline day bid from Paris Saint-Germain could see Willian head for the Chelsea exit door.

However, the latest reports claim that the Blues will not be selling the Brazilian winger anytime soon but they have agreed to send Michy Batshuayi on loan to either Real Betis or West Ham United.

Willian recorded a brace for Chelsea in the 3-0 FA Cup win over Sheffield Wednesday last week. He has scored 7 goals in total this season while also managing 6 assists in 36 appearances.

The 30-year-old’s contract is set to run for another season and he is still a key figure under Maurizio Sarri. Ever since it got revealed that Neymar will miss 10 weeks of action with a metatarsal injury, PSG have been looking to find an immediate replacement on the left flank.

Thomas Tuchel has serious hopes making a statement in the UEFA Champions League this season. The Parisians seemingly have the 2018/19 Ligue 1 already in the bag with a 13-point lead over the rest.

They were planning on adding Willian before going up against Manchester United in the UEFA Champions League round of 16 fixture next month. However, now it seems Chelsea has spoilt Tuchel’s plans while succeeding in keeping hold of Callum Hudson-Odoi as well this January.

See Also: Chelsea defender slams his team for putting up an &#8216;unacceptable&#8217; display against Bournemouth