Chelsea ran rings around their Europa League opponents Dynamo Kiev last night. The match ended 5-0 in favour of the Blues and it could have been worse for the Kiev team.

Olivier Giroud bagged his first Chelsea hattrick. There were two other stars as well who were exceptional on the night and received high praises from the Chelsea boss. The first was Ruben Loftus-Cheek.

“He did very well. He is improving in the last month. He has been able to train after the problem with the back. He had a wonderful match and I’m really happy he could play for 90 minutes.

”His potential as a player is very, very, high. Physically, technically and tactically he is improving, he can become one of the best midfielders not only in England but in Europe.”

The second was of course the youngster who has been in the scanner a lot this season but has delivered everytime, Callum Hudson-Odoi.

“He played very well — better in the second half because we found the spaces and Callum in the spaces is really a very good player. I’m happy for him, but he has to keep the feet on the ground because he can improve more.” 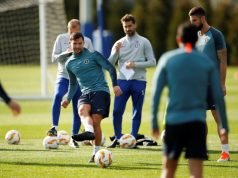