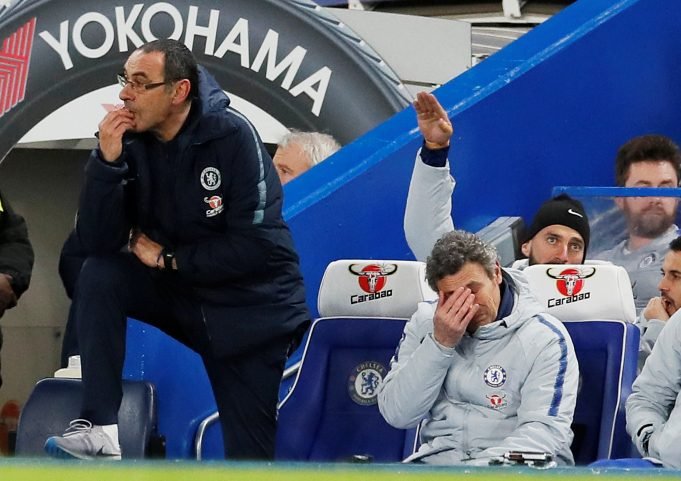 Maurizio Sarri believes his team was not up to pace tactically during the 0-2 defeat to Manchester United on Monday evening.

Goals from Ander Herrera and Paul Pogba hailed more suffering onto the low-morale Blues side to knock them out of the FA Cup. Sarri’s claim to the Chelsea managerial seat hit an all-time low last night after collecting embarrassing defeats at the hands of Bournemouth and Manchester City in the recent past.

The Stamford Bridge fan base was livid by the team’s performance as the team was booed off the pitch after the final whistle. Chants were heard for the sacking of the Italian manager.

After the game, Sarri explained the reason behind his team’s loss against Ole Solskjaer’s men. The former Napoli coach said, “Tonight we were unlucky because we played a very good first half and at the end of the half the score was 2-0.”

“We gave them a few opportunities. We played confusing football in the second half. After the first half it wasn’t easy to play with that score. We played very good first half. I feel the pressure for results of course, not about something else. We have to work, we have to speak, we have to find more aggression and determination in both boxes.”

“It was a big opportunity for us to stay with the supporters but now it is a difficult situation. A difficult day for us. In the second half, it was so difficult for us. Now the most important thing is to stay calm and prepare for the final on Sunday and the Europa League. We have to believe in ourselves and this team, we have great players.”