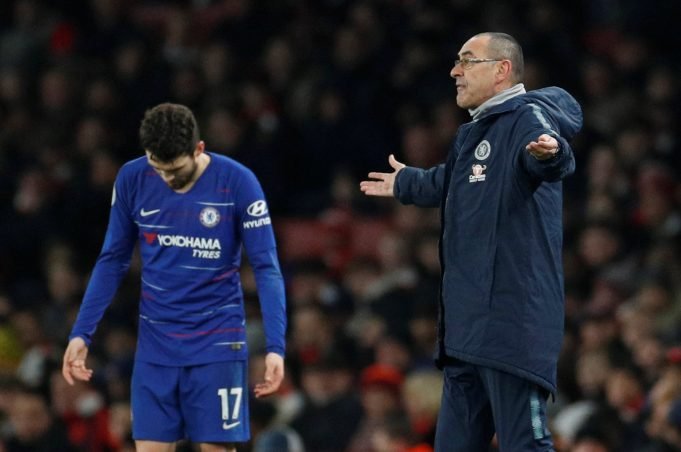 According to the Evening Standard, Maurizio Sarri’s bizarre training routines in the mornings of match days is starting to get on the nerves of Chelsea players.

The Blues lost 2-0 against Arsenal last weekend and the Italian manager hired a translator in the post-match press conference to completely blast his players. This is bound to cause some friction in the Chelsea dressing room but Sarri’s preparation techniques have not rubbed off on the players either.

Sarri was quoted – “I have to say that I am extremely angry because this defeat was about our mentality. They were far more determined than we were, I can’t accept that. ‘It was similar to Spurs, I spoke to the players and I thought it was solved. I want to talk about the tactics but it would appear that this group of players are very difficult to motivate.”

The report claims that the Blues players are not too happy with Sarri’s monotonous training style where the defenders, midfielder and strikers all train away from each other. The former Napoli head coach even holds sessions less than hours away from a late evening game.

In one such session, Alvaro Morata reportedly picked up a hamstring injury which later ruled him out for the game on that day.

Talks of a sacking has not risen yet with Chelsea still in the top four of the Premier League. However, Sarri’s introduction into the Stamford Bridge has not been smooth sailing either. He has forwarded his demands for a Jorginho backup after letting Cesc Fabregas depart for AS Monaco.