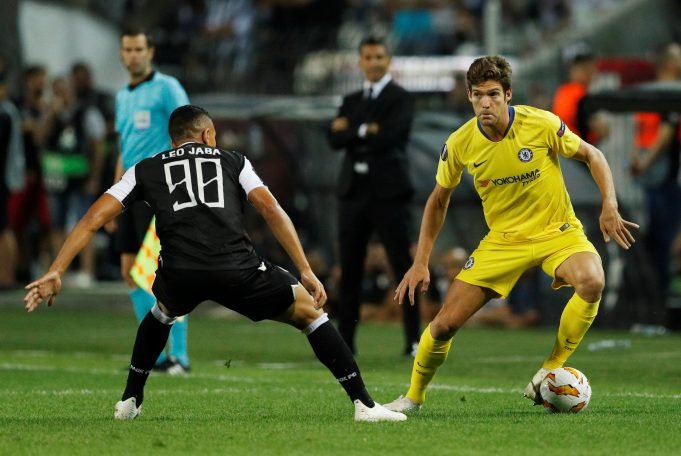 Chelsea left-back Marcos Alonso has said that he joined the club to become the best left-back in the world.

Alonso joined Chelsea from Fiorentina in 2016 on a transfer fee of £24 million. In his first season, he helped Chelsea win the Premier League by scoring 6 goals and providing 3 assists in 31 matches.

This season, the 27-year old has started in all of Chelsea’s matches. He scored Chelsea’s late winner against Arsenal and has provided 4 assists which is the most number of league assists he has provided for Chelsea. Maurizio Sarri’s footballing philosophy has allowed the Spaniard to play in a more attacking role.

Chelsea boss Maurizio Sarri has said that Marcos Alonso is the best left-back in Europe. The Spaniard said that he is eager to live up to that tag.

Marcos Alonso said, “That’s why I came to Chelsea. When you come to one of the top teams in the world with some great players, you can fight for that spot and that’s what I try to do.

I want to keep improving and to work hard to be one of the best. I want to score more goals, I want to give more assists, I want to do more tackles. Everything I can do to help this team is good for the team and good for myself.”

The Spaniard also said that he feels he is in good form at present. He said, “I feel good. I’m enjoying the new manager, I’m enjoying my team-mates, I’m happy here at Chelsea. I’m obviously still hungry for more. It’s going to be a tough season, lots of teams are fighting for everything but I want to win all the titles we are playing for.

For that we have to work hard and I have to be ready for tough times. It’s never easy to get the points at the beginning of the season and even more with a new manager. We are still on our way to where we want to get.

Chelsea have started the season brilliantly under Maurizio Sarri. They have won all of their Premier League matches and began the Europa League with a win over PAOK.

Chelsea will hope to register their 6th successive win of the Premier League and regain top spot when they take on West Ham today.