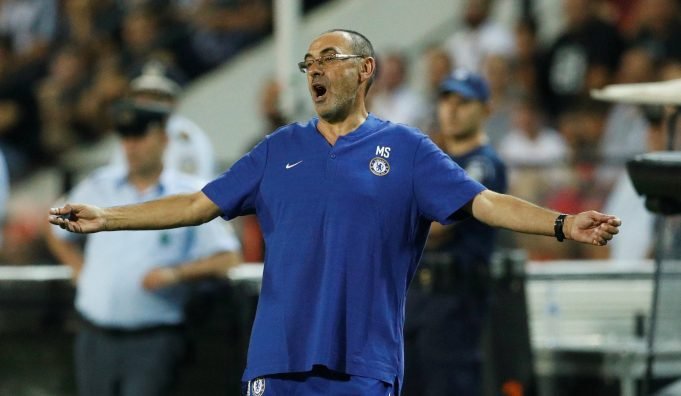 Maurizio Sarri has enjoyed a terrific start at Chelsea as they have won all of their matches this season so far.

The Italian’s footballing philosophy has gained a lot of popularity with people nicknaming it ‘Sarri-ball’.

The former Spurs star said, “Under Antonio Conte, I think it had become: ‘Turn up: stand here; when they get the ball, move here’. By the end it looked as though the players were sick of it.

Tactically, there is of course a difference but I don’t think we’ve seen the full version of Sarri’s high press yet. Winning the ball high up the pitch is perfect for the likes of Hazard and Willian; two passes and they’re in.

One reason Sarri may be holding back on the high press right now is the defensive frailties. What Conte’s back three did so well for Chelsea was give them stability. With a back four, there is more risk. Luiz and Marcos Alonso are vulnerable. I’m not convinced it is a solid back four.

Alonso is wonderful getting forward. Playing wing back under Conte gave him the protection he now lacks. It’s the same for Luiz.

I feel also that they miss N’Golo Kante in that screening role in front of the defence. If Sarri can get a tune out of Luiz and protect Alonso, I think they’re heading for the top four. At some point, they could run into trouble.”

Maurizio Sarri’s philiosophy has seen many of Chelsea’s defensive players play a more attacking role. This adds depth to their attack but also leaves Chelsea’s defence wide open. However, as long as Chelsea maintain possession, they are fine.

Hence, only time will tell whether Sarri’s philosophy will cost Chelsea or not.

The Blues play West Ham at London Stadium today with the target of winning their 6th consecutive Premier League game on the trot.