Frank Lampard has said that he is happy with Chelsea in their 2-0 defeat to Liverpool.

The match turned out to be a bit of a one sided show with the Reds not having to get out of second gear to dispose of Chelsea.

The Blues were struggling to hold on to the cleansheet with 11 men on, and Christensen made it all but game over after getting sent off at the stroke of halftime.

Sadio Mane scored twice in the second half to hand Lampard his first defeat of the new season rather early on. The second goal was yet another mistake from under fire keeper Kepa. Chelsea could have had one back after new boy Timo Werner won a penalty out of nothing, but Jorginho’s miss from the spot ended all hopes for the night.

“I was happy about our defensive game,” he told Sky Sports. “I wanted them to be better on the ball. We showed moments on the counter-attack where we dangerous. But to limit them to the chances they got in the first-half, there were lots of things I was pleased about.

“My team talk at half-time was going to be: ‘let’s be more confident on the ball lads.’ Then the red card changes the whole team talk.

“They can be given or not. Once the yellow is the first decision, you feel it needs to be absolutely critical that it’s red to make that difference. I’m not sure it was. I’m not going to complain too much. 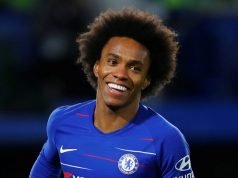