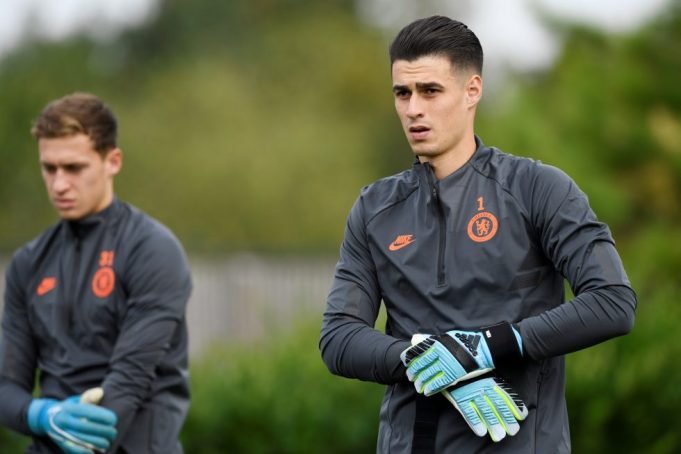 Take this as you may like, but Kepa is undoubtedly the showstopper for Chelsea.

This million-dollar baby has been doing the rounds in the football circuit for quite some time, owing to innumerable reasons. No one will ever forget his antics during the Carabao Cup final against Manchester City a year ago (it was only because of him that we could witness the stud – Sarri’s hysterics from the sidelines). That is when he came into the limelight for the second time after his record-shattering $72 million transfer from Athletic Bilbao in the summer of 2018.

Kepa’s on-pitch row with Maurizio Sarri drew a lot of flak and became ‘the’ topic of discussion for a long time. He, in his post-match press conference, said that he wasn’t trying to undermine his then-manager and described the incident as a ‘misunderstanding’. He later apologised to Sarri and confirmed that everything was solved internally. He will have to wait for a long time before he makes an impact for his national team.

Kepa has 10 caps for his national side. Although he represents the future of Spanish football, his chances are quite limited on an immediate basis since he has to compete with the likes of David de Gea, Sergio Rico, Kiko Casilla and Sergio Asenjo. The Blues’ man between the sticks has named four goalies as his inspiration, including Chelsea legend Petr Cech. He used to study Iker Casillas, Victor Valdes and Pepe Reina in his early days and would take little things he liked about these goalkeepers and would incorporate them into his game.

It was reported that he had a fall-out with Frank Lampard and would be leaving Stamford Bridge at the end of the campaign after benching him for a substantial period, owing to a string of blunders. The Spanish goalkeeper has made a number of high-profile mistakes that have cost Chelsea over the course of the 2019/20 campaign. But Lampard, in an interview, said that his future at Stamford is very much in his own hands by praising his reaction to being left out of the eleven and that he can’t keep all the 20-odd players happy at the same time.

Well, coming back to play in a Champions League game was surely good news for him, but Serge Gnabry and his mates ensured that he had a bad day between the sticks. But the result would have been worse, had it not for Kepa’s crucial saves as pointed out by Lampard. A number of goalkeepers have been linked with a move to Stamford Bridge, so he will have to fight for his place after a rocky start to his Chelsea career.

His position in the West London side would be assessed in the summer transfer window, but the reliable Willy Caballero is ageing and Kepa Arrizabalaga Revuelta, at 25, is, undoubtedly, the perfect bet to be the ultimate shot-stopper and one of the best goalkeepers in times to come.  He can stop the show with his antics but can also mesmerize one and all with his breath-taking, high-flying saves- the quintessential showstopper in every way.