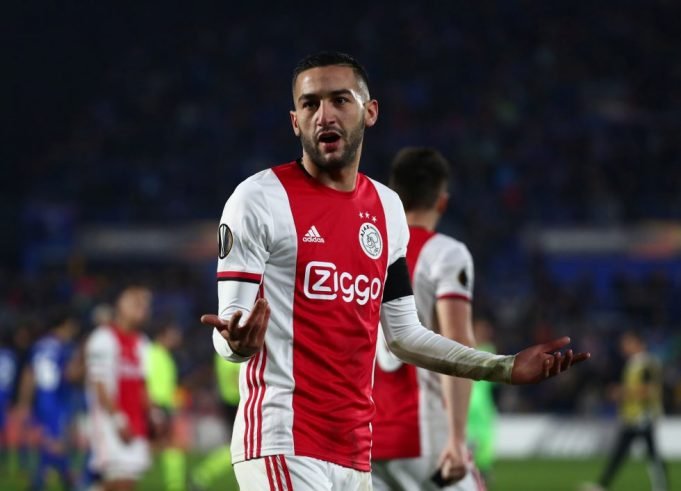 The “Mesut Ozil of Netherlands” with a golden left foot is set to make a mark for his new club once Premier League resumes after the coronavirus pandemic.

Chelsea reached an agreement with Ajax to sign Ziyech for about €38 million, with a 5-year contract in place. However, his personal terms include Chelsea’s promotion to the-Champions League-next season.

Frank Lampard, hoped to bring Ziyech to London in the winter transfer window. However, negotiations took too long and the deal broke off. His move to Chelsea will be his first experience outside of the Netherlands. With 4 assists for Ajax in the Champions League, he has truly been a force to reckon, with accurate crosses into the box and his ability to execute difficult passes to break down defences.

The Moroccan international revealed that Chelsea Manager Lampard played a big role in his decision to leave Eredivisie side-and move to Stamford Bridge. He also said that they were frequently in touch and gave him a good, optimistic feeling of his future at Stamford Bridge. He is a fan of Lampard’s abilities as a player and is relishing the chance to learn from the Chelsea boss.

Ziyech has already given Chelsea supporters a glimpse of what he is capable of but they will be hoping to see much more with his forthcoming transfer to the Premier League club. But many football pundits have criticized his fitness and physicality and that he won’t be able to survive the amount of games and the physical side of the Premier League. His slight frame has always been brought into the limelight ever since he came from the academy at Heerenveen (his strength according to Fifa 20 is 59……not bad).

But his former coaches Hans de Jong and Boudewijn Pahlpatz-rubbished Ziyech’s physicality concerns and are confident that he will beat the Premier League challenge as well, as he did to the rumours back at Ajax. The coronavirus pandemic could cause Hakim Ziyech to be left in limbo when it comes to playing for Chelsea or Ajax later this year. The Dutch League is most likely to continue when the coronavirus situation dies down but with Ziyech contractually obliged to sign for Chelsea on July 1, this will cause a problem for Ajax and the Blues.

Experts say that he may not be able to play for either club, especially in Ajax matches from July 1. So, Chelsea fans may have to wait to see the Moroccan street footballer in action. To add to the misery, the rescheduling of the African Nations Cup, scheduled to take place in January and February will almost certainly clash with those of the Premier League. This means Ziyech could miss up to five weeks of the domestic season should Morocco reach the final (Morocco are the firm favourites to clinch the title).

Chelsea have been devoid of a playmaker since Hazard left the Blues for Los Blancos last summer and Ziyech’s arrival will help add an attacking edge and creativity. Lampard believes that he could fill Hazard’s shoes and fill the void left over by the Belgian (Willian and Barkley tried). He is expected to become an integral member of the Blues next term and is eager to make giant strides towards glory. He is more than ready to make the next step in his career and looks an exciting first summer signing by Lampard.