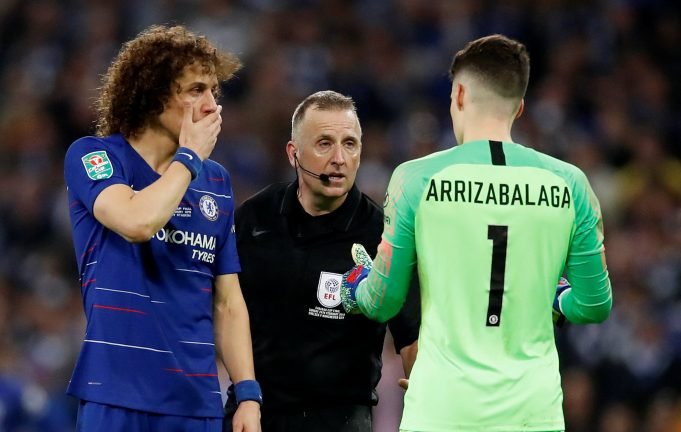 Chelsea goalkeeper Kepa Arrizabalaga insists he didn’t want to show any disrespect following his confrontation with manager Maurizio Sarri over a substitution.

Chelsea boss wanted to have Willy Cabellaro in the goal for the last few minutes as Kepa was having a problem with a slight crap. Caballero was ready to come on but to everyone’s surprise, the Spanish keeper refused to leave the pitch.

A confusing situation got created as Blues defender David Luiz also tried to make him understand the situation. But the former Athletic Bilbao man was adamant to his stand and Caballero went on to return to his seat in the dugout.

This created an angry atmosphere as Sarri was visibly furious and almost left the stadium.

Kepa said, “I know if you see it from outside, I don’t know how it went out, it is not the best image

“I have spoken with the boss. I think it was misunderstood.

“I understand that on television, on social media, they’re talking about this but I am here to explain it, to say that it wasn’t my intention to go against the manager.

“We have spoken now, and I was only trying to say I’m fine. He thought I wasn’t fine. It was in tense moments, with a lot happening.”

“In no moment was it my intention to disobey, or anything like that with the boss

Just that it was misunderstood, because I had been attended to by the medics twice, and he thought that I wasn’t in condition to continue.

“This was nothing to do with the problems I had this week, with [hamstring] it wasn’t that. And, well, it was misunderstood.

“Because he thought I couldn’t continue, and – fundamentally – I was trying to say that physically I was fine.”