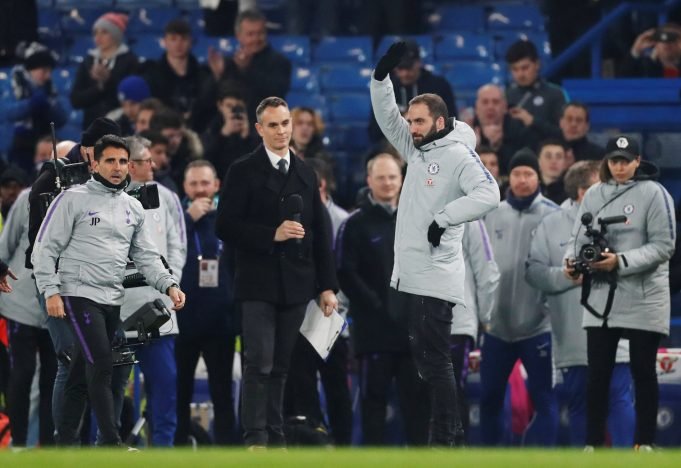 Chelsea’s newest signing Gonzalo Higuain has said that he is very much excited by the reunion with Maurizio Sarri. The Argentine striker was brought into the side on loan from Juventus, cutting short on his loan stint with AC Milan with options to either extend the loan for another season or buy the player permanently for €36million. The Blues are in dire need of inspiration up front with both of their strikers Alvaro Morata and Olivier Giroud failing to deliver the goods since their arrival at Stamford Bridge.

Speaking to the club’s official website after completing his move to the west London club, the Argentine marksman expressed his delight to reunite with the manager of his former club Napoli. The player said, “It was an opportunity that when it presented itself I couldn’t miss out on. I’m really excited to be here, to be working with Maurizio Sarri again and to be at a club with so much history.”

He added, “I’m just really happy to have completed the move and I hope to achieve all the goals which the club has set for itself between now and the end of the season. I’m someone who is always trying to improve, day after day. I think the most important thing is to be humble, even when we make mistakes, and so when that happens I will always try to rectify that and improve.”

Higuain concluded, “For the rest, I’ll leave other people to give their opinions on me. I’m not someone who likes to talk too much about myself but I’m someone who tries to improve, and get the best out of myself and my team, at every opportunity.”