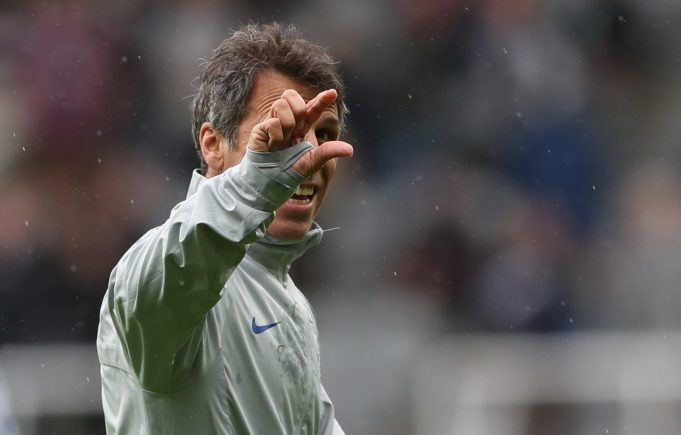 Chelsea assistant manager Gianfranco Zola was not too thrilled with the team’s performance in their Carabao Cup fixture against Derby County last night.

It took an early own goal from Fikayo Tomori to give Chelsea the lead before Jack Marriott equalised for Derby County. Chelsea restored their lead through another own goal, this time from Richard Keogh.

Derby County found another equaliser thanks to Martyn Waghorn before Cesc Fabregas became the first Chelsea player to score in the match.

Fabregas’ goal was the final goal of the match and Chelsea won 3-2 to advance to the quarter-finals of the Carabao Cup.

In the post-match press-conference, Zola said that Chelsea were more than just shaky against Derby County. He said, “More than a little bit, to be honest. Especially towards the end. A lot is down to them. They really played well and surprised us, played with a lot of quality. A lot was down to us. The passing wasn’t as sharp as it normally is, and in the last 10-15 minutes we lost control. The distances were too far apart, and when you give space to the players Derby have got, it becomes difficult. We need to improve, it was positive in some ways, but others didn’t work properly tonight.

The first half, they were obviously screening a lot, marking Cesc Fabregas a lot. The defenders had more time, but they weren’t as sharp as normally with the ball. This created some pressure so we didn’t have control of the game. We lost some balls and they were very good at taking advantage on our mistakes.”

Zola also criticised defenders Gary Cahill and Andreas Christensen for their ball distribution during the match. He said, “A player like Cahill, they play and then they don’t for a while, so they might have a problem. When I said we didn’t play well, I didn’t mean the defenders didn’t defend well. The way we play everyone has to participate in the defensive phase. Some things didn’t work. I thought Gary and Christensen in the first half could have done better with the ball. Normally their distribution is better than tonight. That’s the complaint I can make about that. But we’ll go through this and discuss it.

Second half the passing was better. David came on and did well, and we were cruising until 10-15 minutes to go where the game became too much up and down: a chance for us, a chance for them. We didn’t want that. So something didn’t work out as normal. But Derby were an excellent opponent.”

Chelsea take on Bournemouth in the quarter-finals on December 19.