Chelsea have been given some really grave news by Stuart Pearce who believes that the Stamford Bridge clubs is years behind Manchester City and Liverpool.

“These two are streets ahead of the rest,” he said. “Tottenham are in third place and they’ve lost 11 games. So that’s quite excessive when you consider Liverpool have lost one.”

“That’s what they’ve got to do to catch those top two. I don’t see many teams rivalling that top two in the next few years. I don’t think they’ve got the financial clout to do it.”

“You look at Chelsea. If they lost (Eden) Hazard you’d be very fearful about where they would actually finish in the division.”

“I think it’s going to be one of the toughest blows that they ever suffer,” Pearce added.

“They’ve not had their hands on a trophy for three seasons. If that turns into four seasons, that’s a long time for a team playing as well as this.”

“They’re only not picking up a trophy by virtue of Manchester City being too good. Roll the clock back 15 years and they [would have] won the league in February.” 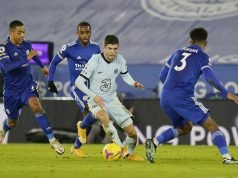