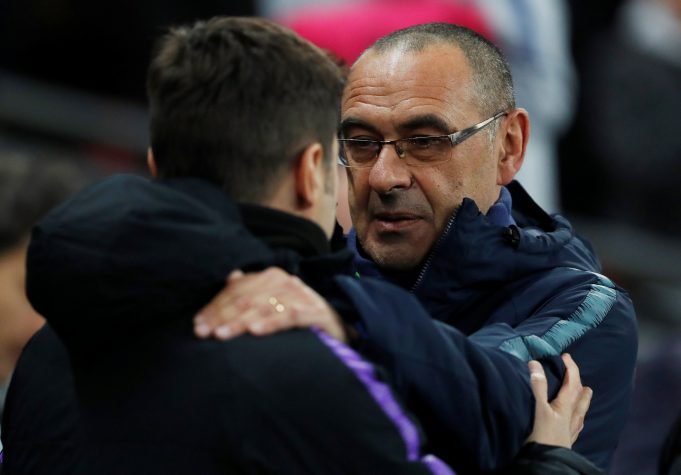 The Blues had a strong start to the season under Maurizio Sarri as they went unbeaten in their first 18 matches. However, things haven’t gone very well for Chelsea lately.

After losing 2-0 to Arsenal, Chelsea were at the receiving end of a 4-0 drubbing to Bournemouth earlier in the week.

Chelsea fell to 5th in the league table before going back to fourth following a 5-0 drubbing of Huddersfield Town yesterday.

Maurizio Sarri is under at the moment and many have said that he might get the sack soon if Chelsea’s performances. Additionally, he has reportedly received text messages from Chelsea owner Roman Abramovich saying that he will be sacked if Chelsea don’t seal a Champions League berth next season.

Chelsea are eyeing Tottenham Hotspur boss Mauricio Pochettino as Sarri’s replacement if they sack him in the summer. Pochettino has been at Tottenham since 2014 when he replaced Tim Sherwood.

Tottenham haven’t won any titles under Pochettino but have finished in the top four of the Premier League in the last three seasons. Spurs are currently second in the Premier League, four points behind leaders Liverpool.

Pochettino has four years remaining on the contract which he signed last May. The former Argentine international can cost Chelsea £50 million. However, it all depends on how Maurizio Sarri does in the remainder of the season.

Manchester United also showed interest in signing Pochettino earlier. However, given how the team has done under Ole Gunnar Solskjaer so far, there’s a very good chance Manchester United can appoint the Norwegian as their manager permanently.

After thrashing Huddersfield Town 5-0, Chelsea take on Manchester City next Sunday before playing the first leg of Europa League last 32 against Malmo FF at Malmo.