Frank Lampard’s debut season with Chelsea is going to be a tough one because of the club’s transfer ban.

Kenedy has been a Chelsea player for four seasons now but has spent almost half of that time on loan at Watford and Newcastle United combined. He has played 27 times for the club and scored thrice but he hasn’t made a Premier League appearance for the club since the end of the 2016/17 season.

Last season, the Brazilian was at Newcastle and could only find the back of the net once in 28 appearances for the club. This summer, it was reported that he would sign a new contract and head on loan to Reading but a deadline day move broke down.

He’s currently at the club as a backup winger behind the likes of Willian, Pedro, Christian Pulisic and Callum Hudson-Odoi. The 23-year-old could still leave the club before the Europen transfer window closes on September 2 but it may not be on loan as he’s in the final year of his contract.

Chelsea are known for being reluctant to offer new contracts to players aged 30 over but because of their transfer ban, they offered David Luiz one at the end of the last season. The Brazilian was expected to be an undisputed starter under Lampard with one of Antonio Rudiger, Kurt Zouma, or Andreas Christensen partnering him. However, surprisingly, Luiz moved to Arsenal on deadline day after an alleged fallout with Lampard.

If Luiz didn’t leave Chelsea, Fikayo Tomori was almost sure to leave the club on loan with plenty of interest from Championship and Premier League clubs. Tomori was a key member of Lampard’s Derby County team last season and was even named the club’s Player of the Year. He’s now expected to play a much larger part in the Englishman’s Chelsea-rebuild, being one of the four recognized centre-backs at the club.

The 21-year-old will be Chelsea’s fourth-choice centre-back for the 2019/20 season but he surely wouldn’t be at the club if it wasn’t for a combination of Luiz’s sale and the transfer ban.

Marcos Alonso signed for Chelsea in 2016 and was a key player of the side that won the Premier League title in his debut season under Antonio Conte. He impressed in a wing-back role in his first two seasons in the Premier League and was even named in the PFA Team of the Year in 2017/18.

Last season, Chelsea reverted to a back four and the Spaniard struggled in a traditional full-back role. His adventurous runs forward often left Chelsea susceptible to counter attacks and after a certain point, Maurizio Sarri replaced him with Emerson in the starting XI.

It looks like Frank Lampard has also realised that the 28-year-old is a risk in a back four and that’s probably why the new Chelsea manager has started Emerson in the first three games of the season. If it wasn’t for the transfer ban, the Blues would have signed a recognized left-back and sold Alonso. Instead, he will be a player at Stamford Bridge for at least one more season.

Chelsea’s transfer ban prevents them from registering new players but there was a loophole that allowed them to sign two players. The Blues were allowed to make any loan signing from the 2018/19 season permanent before June 30 as they were already registered with the club.

Gonzalo Higuain and Mateo Kovacic were on loan at Staford Bridge last season. The former had a poor loan stint and it didn’t make any sense for Chelsea to sign a 31-year-old striker permanently for the price Juventus had set. The latter, Kovacic, didn’t have a great season on loan either. In fact, he didn’t find the back of the net even once in 51 appearances for Chelsea. However, the Croatian is still only 25-years-old and has shown that he has the potential to be a good player.

Kovacic’s loan was made permanent for €50 million to give Lampard more options in midfield but if it wasn’t for the ban, the club would have surely spent that money on a different player.

Like David Luiz, Oliver Giroud is another player aged over 30 who signed a new contract with Chelsea towards the end of last season because of the transfer ban but unlike Luiz, Giroud still remains with the club.

The Frenchman joined the Blues in January 2018, having lifted the FIFA World Cup that year despite not registering a shot on target at the showpiece event. In his first full season with Chelsea, he played a key role in winning the Europa League by scoring 11 goals in 14 appearances in the competition but he could only score two goals in the Premier League.

The soon to be 33-year-old expressed his desire to return to France earlier this year and was even linked with some Ligue 1 clubs. However, because of Chelsea’s predicament, he’ll be at the club for another year 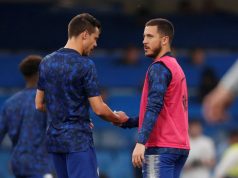 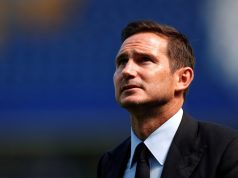 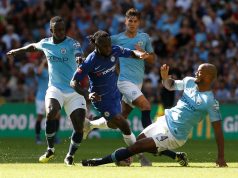