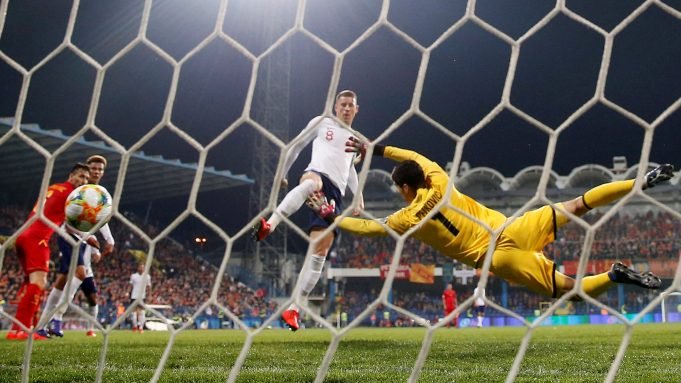 Ross Barkley’s initial six months as a Chelsea player was tough but he has emerged as a key player in Maurizio Sarri’s midfield trio this season.

The 25-year-old scored a brace and furthered an assist during England’s 5-1 triumph over Montenegro this past week.

Speaking to the press about his improvement, Sarri said, “Ross improved a lot tactically and also physically. Last season he played only 200 minutes, so he needed to stay on the pitch.

“Fortunately now he is going very well with the leg and has improved a lot during the season. He is a very, very good player.

“He improved a lot in the defensive phase because, technically, he was and is a very good player.

“In the offensive phase, he’s able to score seven or eight goals every season. But now he’s a good player also in the defensive phase. He’s not a defensive midfielder, of course, but he’s good enough now and he is important in our midfield.”

Sarri knows Barkley’s limitations as a player. He added, “Probably he is not a leader in that way. He is not able to lead the other players, but he’s a fighter, so he is able to fight in every match.

“It’s a question of personality. Sometimes you have a very young player with a very high level of personality, sometimes not. It’s not easy to change — it’s an individual characteristic.

“At the beginning of the season, he had less confidence because last season was really very hard for him. Then, after three, four or five matches in the starting XI, he changed and now he’s a very important player for us.”