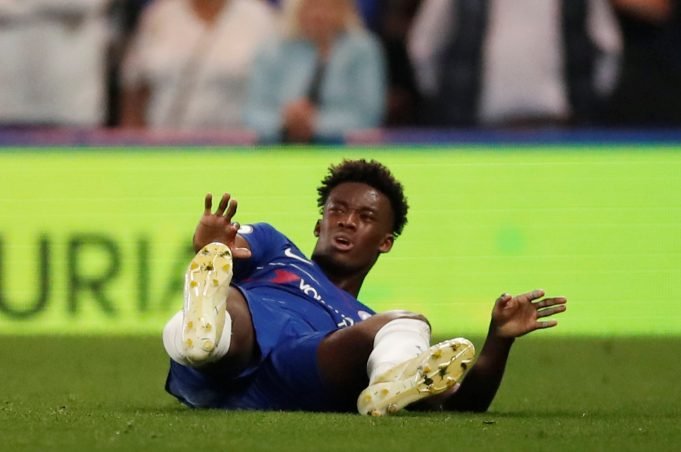 Callum Hudson-Odoi believes the 2-2 Monday draw against Burnley was his last game of the season after suffering a suspected Achilles tendon tear.

The teenage youngster was seen leaving Stamford Bridge in protective crutches as a full assessment is about to be made over his right foot.

“[I’m] really gutted to end my season with a ruptured Achilles,” the Englishman posted on his Twitter account. “Got to work hard and try and come back stronger for next season!”

The Blues assistant coach, Gianfranco Zola admitted that the injury looked critical. He said, “It’s not an easy one. I think it’s a serious injury.

“It’s his Achilles tendon. I cannot tell you the extent of it. I don’t know – he’ll have to have an examination, but it’s not looking good. I don’t know if it’s ruptured.

“N’Golo was taken down on the counter and, as he fell, he fell on the foot of a player, so he had a contusion in his ribs. He couldn’t breathe totally. He’ll be alright.”

Kante is expected to be back in action soon enough but the same cannot be said for Callum Hudson-Odoi. The youngster had finally hit the ground running after receiving a spat of consistent first-team action under Maurizio Sarri.

Now, he has to drop down to ground zero and start from scratch with his recovery. The 18-year-old might just miss the United Nations League Finals as well in June.