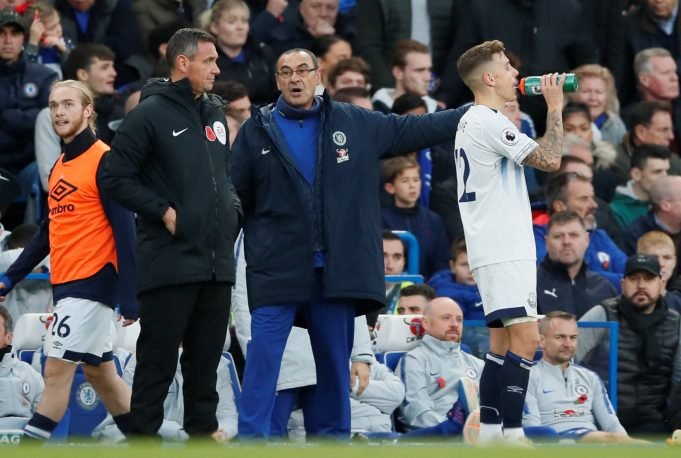 Chelsea boss Maurizio Sarri has said that the club won’t keep him if he goes trophyless for years.

In Sarri’s 28-year long managerial career so far, he is yet to win a trophy. The closest he came to winning a trophy was last season’s Serie A with Napoli. However, the Gli Azzurri ended 2nd, just four points behind Juventus.

Napoli also came 2nd in the 2015-16 Serie A but they were 9 points behind Juventus then.

This season is a very good opportunity for Sarri to win a trophy as he has started his Chelsea stint very well. Barring the Community Shield, Chelsea haven’t lost a single game this season.

They are 3rd in the Premier League behind Manchester City and Liverpool. However, Chelsea’s best shot at winning a trophy is the Europa League. Chelsea are one of the only four teams who have won each of their Europa League matches so far. The others are Eintracht Frankfurt, Dinamo Zagreb and Red Bull Salzburg.

Speaking ahead of Chelsea’s match against Tottenham, Sarri said that he needs to end his trophy drought if he’s to stay at Chelsea.

When asked if Chelsea would keep him if he went four years without a trophy, Sarri replied, “I don’t think so, but I don’t know. It’s up to the club – if it’s more important to win, or more important to improve the players.

I want to win something, just to avoid this question. Sometimes there are the conditions for winning. Sometimes not.”

Sarri’s counterpart today Mauricio Pochettino has also been unable to win a single trophy throughout his managerial career.

Sarri said that despite not winning a trophy, Pochettino is a good manager. The Italian said, “It’s clear he (Pochettino) is a very important coach, with a trophy or without a trophy.”

The former Napoli manager also picked Christian Eriksen when asked which Spurs player he would like to sign.

However, he refused to talk any further about signing Eriksen when he was told about the Dane’s contract expiring this summer. Sarri said, “No, no, no. I like him very much, but I don’t want to talk about a player of Tottenham for the market, of course. I only answered a question.”