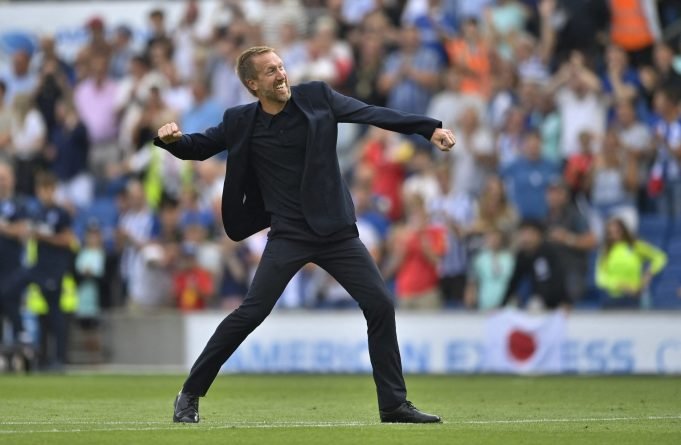 Chelsea’s game against Milan ended up being more comfortable than expected.

Chelsea manager Graham Potter is delighted to get his side’s Champions League campaign up and running. He has praised his squad for being fantastic to work with.

It was the club’s first win in the UEFA competition this season and Potter’s first in his coaching career.

His debut as Chelsea boss was in Europe, however, his side could not get over the line against RB Salzburg at Stamford Bridge last month.

The game against Milan ended up being more comfortable than expected, though Potter admits his side got off to a nervy start.

“It was a good night for us,” he told BT Sport. “We needed to play well. The attitude and application of the players was fantastic. It was a really important win for us.

“I thought we started off a bit nervous for about five minutes. It was just a result of us wanting to do so well. But then you saw the appetite of the players.

“We got control of it and had a bit of a threat. The first goal was important. We had to start a little on the back foot in the second half. We suffered a bit which was good and the second goal gave us a breather.

“Clean sheet, three goals. The personality of players was good.”

Summer signing Wesley Fofana opened the scoring before coming off injured and Potter says he will have more of an idea of the extent of the injury after a scan tomorrow.

The former Brighton boss said: “We’ll have to scan it tomorrow. See how it is. Nothing to report at the moment. The one disappointing thing of the evening.”

“It was a good performance from the team overall,” Potter added. “Apart from the end of the first half, they didn’t have many chances. It says a lot about how we defended as a unit. It was an important win but still a long way to go in the competition.

“The boys have been really open, responsible, honest and fantastic to work with. They realised they weren’t at the levels. That’s great from a coach’s perspective.”

Pierre-Emerick Aubameyang made it two goals in as many matches, and his first in the Champions League since scoring a brace against Real Madrid for Borussia Dortmund in 2017.