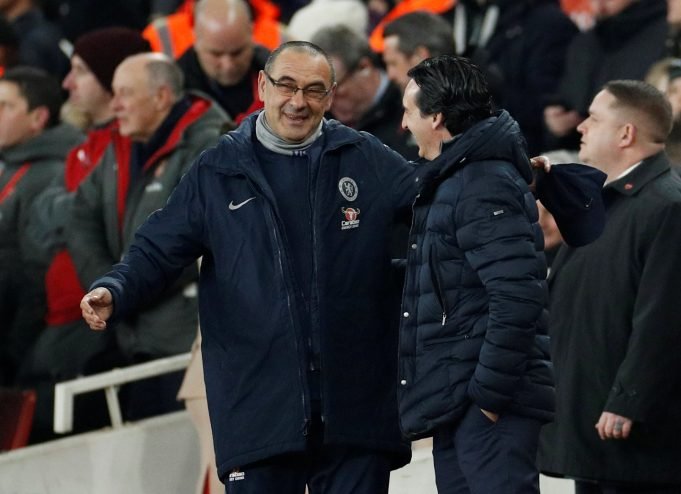 Chelsea boss Maurizio Sarri believes that Chelsea have had a better season than Arsenal’s so far. Arsenal and Chelsea are currently 5th and 6th in the Premier League table. Both teams have equal points and goal-difference but Arsenal are ahead by virtue of more goals scored. In the Premier League, Chelsea beat Arsenal 3-2 at Stamford Bridge while Arsenal beat Chelsea 2-0 at the Emirates.

Both sides confirmed their spot in the last 16 of the Europa League by winning their respective home games 3-0. Arsenal defeated BATE while Chelsea beat Malmo FF.

Chelsea’s recent results have been quite disappointing, particularly their defeats to Bournemouth, Manchester City and Manchester United.

Sarri has questioned why his side get so much criticism when they have the same number of league points as Arsenal. The former Napoli manager said, “I keep hearing people praise Arsenal’s season, but they are not in the EFL Cup final, they have the same points as us in the Premier League and reached the last 16 of the Europa League just like us. I don’t understand why people act as if our season is so negative and Arsenal’s is impressive.

It’s true there have been many ups and downs, including some deep lows, but considering it’s my first season in a new league and environment, I think that’s acceptable. I did take over a team that finished fifth, not one that won the championship.”

Chelsea next play the Carabao Cup final against Manchester City on Sunday.