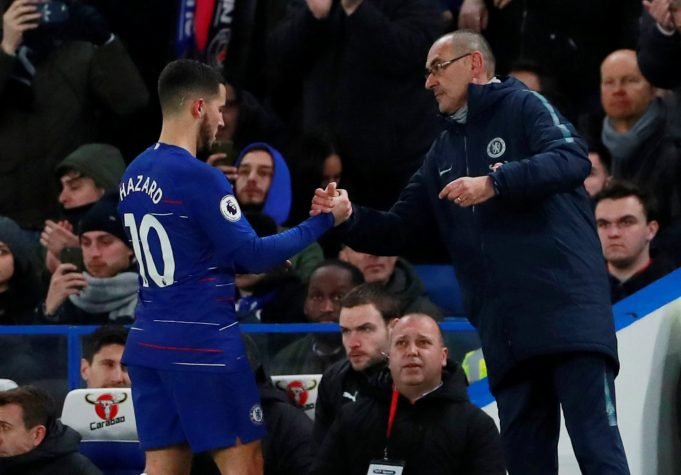 Gianfranco Zola has said both Eden Hazard and Maurizio Sarri are working to find “common ground”. His comments come in the wake of a controversy that everything is not right between the Chelsea gaffer and their talismanic attacker.

The Belgian skipper put in a brilliant shift in the Carabao Cup semi-final return leg against Tottenham Hotspur, overturning a one-goal lead taken by the north London rivals in the first leg. He and N’Golo Kante scored a goal apiece for the Blues but the match went into penalties with Fernando Llorente equalising on aggregate. Kepa Arrizabalaga shut out Lucas Moura as the Blues went into the final where they will face Manchester City.

However, despite his brilliant performance, the Italian gaffer said that the player has to do more and that his potential is higher than performances. Hazard, on the other hand, said that he does not care about Sarri’s comments, which has given rise to speculations that all is not well between the duo.

Giving his view on the matter, Zola said, “We try to give him freedom but we are also trying to be an organised team, defensively and offensively but especially defensively.”

He added, “So that’s why we ask Eden sometime to put himself about in working hard. We know it is not his best quality. We understand that he needs to be fresh when he receives the ball. There is no doubt we are on the same page. But we want to find a common ground where he can get the best out of himself and the team can benefit from him, not only when he is scoring goals but when there are moments in the game when we need everyone to defend and to press.”