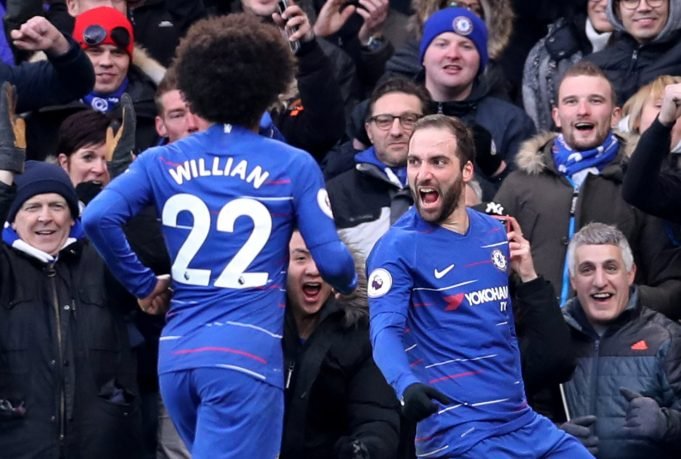 Willian has praised Chelsea and Higuain on the back of their 5-0 win against Huddersfield Town.

‘We have a lot of good players, a quality team, and very good players in front,’ said the Brazilian, whose corner kick set up David Luiz for our fifth goal of the afternoon. ‘It doesn’t matter the player that plays there, we have the same profile of football and that’s what the manager says to us: “Play fast, play quick.” Higuain played very well with his movements, with one-twos around the box, so it was very good for us.’

‘It was much better,’ added Chelsea‘s No22. ‘We played really well, we did what we had to do – we had possession, we scored goals, we were clinical. That’s it. We have to keep going.

‘We know when you play for Chelsea, when the results don’t come, the pressure comes. You have to work on the situation and, of course, we know in football you always have to improve, even when you win games. After the [Bournemouth] game, which was a bad game for us, we came strong and we showed character. This is Chelsea.’

SEE MORE: Former Liverpool star claims Gary Cahill snubbed a move to Fulham because he thinks Sarri is going to be sacked