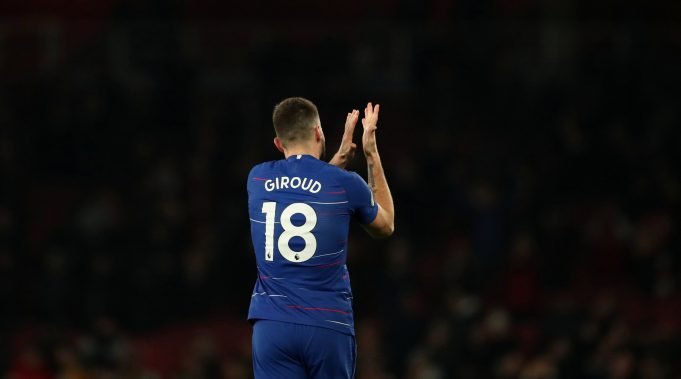 Willian believes Giroud is still an important player for Chelsea

Olivier Giroud has struggled for form this season, with the Frenchman starting only six games in the Premier League under Maurizio Sarri.

It is a no-brainer that the arrival of Gonzalo Higuain at Stamford Bridge is bound to jeopardise the future of the World Cup winner but Willian believes the Frenchman still has a place in the squad.

Chelsea are still alive on all four fronts, having progressed to the fifth round of the FA Cup after setting up a final with Man City in the EFL Cup next month.

And Willian believes that the Blues can even win the Premier League, which is quite an optimistic and bold claim considering that his team are 13 points behind leaders Liverpool.

“We want to win titles and we have opportunities to do that, we can still win the Premier League as well,” Willian told Sky Sports.

“In football, you never know what can happen, even the teams who are there can lose one or two games.

“Giroud is a very important player for us – it is difficult for the manager to think about all the players because only 11 players can play.

“But we have a lot of games and the same 11 players cannot play every game so we do need to change and rest some players.”

Chelsea travel to the south coast to face Bournemouth on Wednesday night and Gonzalo Higuain will be expected to make his Premier League bow.