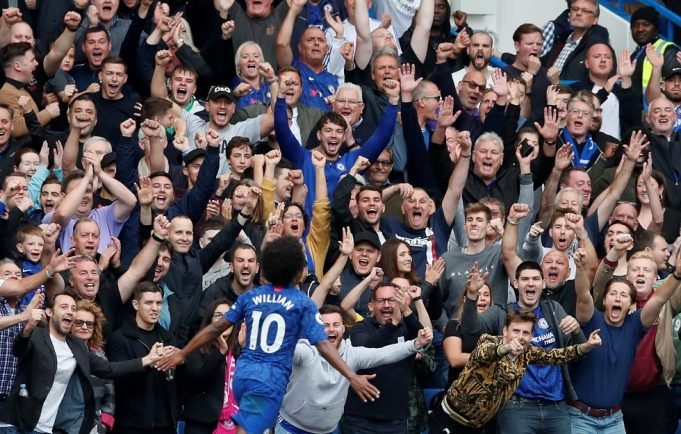 Willian will be finalizing his decision regarding his future after the season is over for Chelsea.

Reports emerged last night that the Brazilian was close to signing a new deal with his current employers but his agent said otherwise.

Kia Joorbichan, Willian’s representative lifted the lid on the winger’s contract situation. He revealed that two more Premier League clubs have put up lucrative offers of their own which Willian is currently considering.

“I don’t think he’s done a U-turn or any kind of turn,” said Joorabchain when asked about his client’s future. “He’s always been very much the same mode. We had two very big offers – one from MLS which required him to move on July 1 – but he’s always been in the same mode, saying, ‘I want to finish the season at Chelsea and the day after the season has finished I will make my decision’.

“He has two concrete offers from Premier League clubs on the table, he has an MLS offer on the table which is very big, and he’s got two other offers in Europe So Willian is in a very good position and he is going to make his decision after the last game of the season.”

The two clubs thought to be in the running for Willian are Arsenal and Manchester United. One more player who has been strongly linked with Chelsea all year is Coutinho, who Joorbichan feels is no closer to deciding on his future either.

He added, “Because the Champions League is going to run all the way until August 23, I think it will be difficult for players like Coutinho to make any commitment or move until that date He has the Champions League at the moment and they have to qualify for the next round [against Chelsea], and then he could play Barcelona, believe it or not.