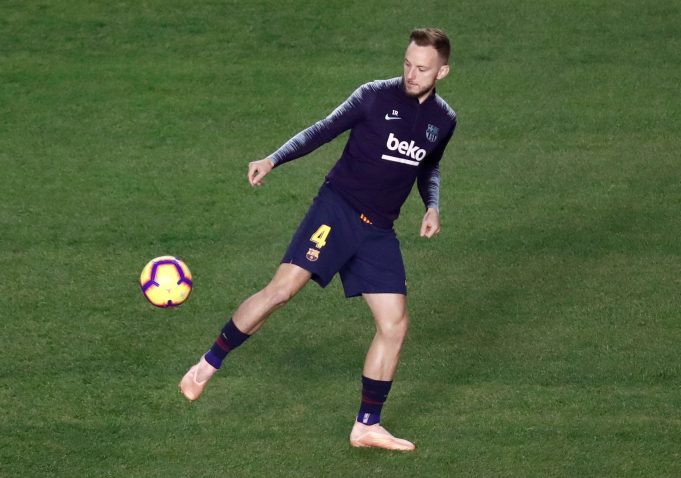 News outlets have gone into a frenzy since rumours of Ivan Rakitic’s potential Barcelona exit came out last week.

Plenty of links have been drawn with Premier League outfit, Chelsea with Inter Milan targetted as his top destination.

The Serie A side has already wooed Real Madrid’s Croatian sensation, Luka Modric last summer and is ready to shift all their attention towards the 30-year-old Barca man.

According to La Gazzetta dello Sport, Rakitic is unhappy with the Blaugrana’s latest signing of Frenkie de Jong from Ajax. The Dutchman is due to arrive at the Camp Nou next summer and he could potentially take up Rakitic’s roster spot as a regular starter.

The Barcelona midfield is already stacked with the likes of Arthur Melo, Sergio Busquets, Arturo Vidal, Carles Alena, Rafinha and Sergi Samper. The La Liga outfit are also contemplating adding Adrien Rabiot to the mix when his contract with Paris Saint-Germain runs out.

Ernesto Valverde still prefers Rakitic for majority of Barca’s endeavours over some of the younger stars. Philippe Coutinho, who signed for a club record fee in January 2018 has been forced to play out from the wing position due to the Croatian’s influence centrally.

However, with a wave of younger talent heading towards the Catalan outfit, it might be time for a veteran like Rakitic to move on. Chelsea’s ranks are predicted to be hit significantly if Eden Hazard leaves after this season.

Maurizio Sarri has also demanded for a Cesc Fabregas replacement with Jorginho struggling to find his best form in England. Rakitic could easily slot into the Blues’ midfield trio which could also see N’Golo Kante return to his most suited role of a defensive midfielder.