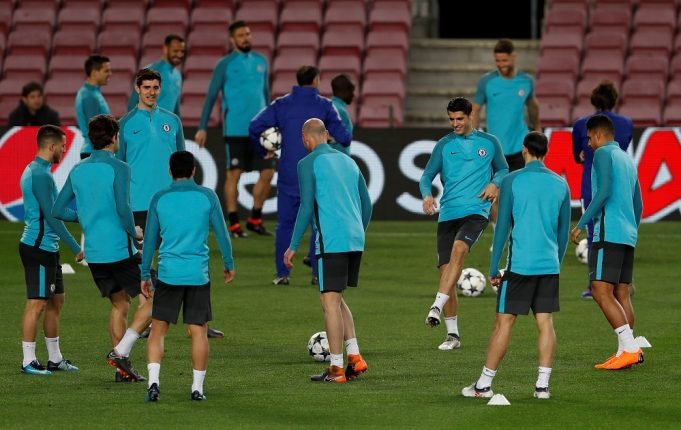 Chelsea had an underwhelming Premier League campaign this season after winning it last season under Antonio Conte. They have finished fifth in the league and will miss the Champions League next season.

Conte is almost certain to leave Stamford Bridge this summer after a decline in the club’s performance. His future has been under scrutiny since before the season began, as he negotiated a pay-rise without extending his contract and complaints over the club’s transfer policy.

Few players also have been linked with a summer exit, goalkeeper Thibaut Courtois is one of the them. His contract will expire at the end of the next and the Blue’s are keen to keep hold of him. The club have been in talks with him over fresh terms for some time but he has been stalling on putting pen to paper.

Belgian journalist believes the Belgium International is waiting to see if his potential suitors make a move for him before he commits future to the Premier League giants.

Speaking on Sky Sports’ Transfer Window Podcast as quoted by dailystar, Terreur said: “There are three options and I don’t see him signing a new deal with Chelsea unless he doesn’t get his transfer, then he might consider signing a new deal.

“There’s a big offer on the table, it’s still on the table but I think he’s seeing if clubs come in for him.

“Does he sign a contract, yes or no? At the moment I think it’s a no.”

“The Kepa deal collapsed and then everything changed for Courtois too. I think he’s hoping for a club he can play in the Champions League.

“His first preference is always going back to Madrid because his family situation with his former girlfriend and his two kids living out there.

“At Real, is he first choice at the moment? I’m not sure. They will only decide on their transfer targets after the Champions League final.

“In the last two years, Keylor Navas has performed well in the Champions League final and they don’t sign a new goalkeeper afterwards so that might happen again.”

Terreur said: “Courtois has held talks with PSG in London, the director of football has been in London to present the PSG project to Courtois.

“He likes the project but everything with PSG depends on Financial Fair Play.

“With Atletico Madrid, if [Jan] Oblak leaves maybe that will become an option for him too.”