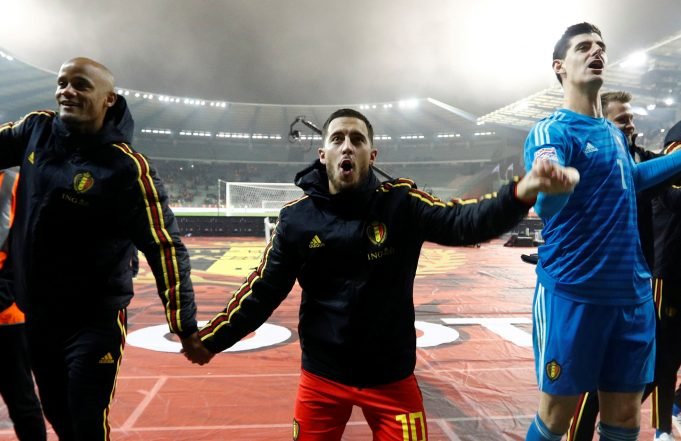 Thibaut Courtois has urged Eden Hazard to join him at Real Madrid next season as rumours continue to build over the latter’s possible departure from Chelsea this summer.

Starting Galacticos keeper and Hazard’s international teammate, Courtois told VTM Nieuws, “It would be nice, of course, but I cannot say much about it. That is something he has to decide and what Madrid must decide if they want him because I do not know that either.”

“But Eden is a top player and also my buddy, so if he came here it would be fun, but he has to make his choices.”

The 26-year-old was asked whether he had spoken to his former Chelsea teammate about the possibility of a move to which he replied, “No, occasionally we laugh at the fact that we like to play football together but that is something I do not interfere in. We will see at the end of the season what can happen but Eden is a fantastic football player.”

Hazard has already revealed to the press how he feels about his future at South West London. The winger told RMC Sport in January, “I know what I’m going to do. I have decided. For now, the only thing to think about is playing well for Chelsea.”

“I have a year-and-a-half left on my contract, everyone knows. My decision will be known soon, but it’s not something that affects my mind. I think about it, but without thinking about it. When I’m in the field, I just want to play. We’ll see what happens after.”

See Also: Maurizio Sarri Claims To Have Had No Words With Chelsea Owner Since 6-0 Defeat