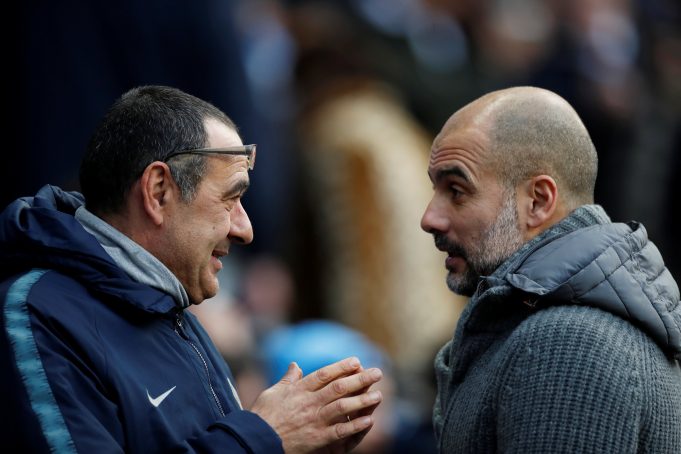 Both teams will be entering Sunday’s match at the back of victories in their previous matches. While Chelsea beat Malmo, Manchester City beat Schalke in an exciting encounter.

The match is a very big one for Chelsea as they suffered their biggest Premier League defeat to Manchester City not long back. Chelsea will be looking to avenge that defeat. Despite beating Malmo in both legs of the Europa League round of 32, we can’t say that Chelsea have been convincing. However, a victory against City will certainly silence all their critics. Additionally, Maurizio Sarri can surely win back the trust of the Chelsea board and fans. It will also be Chelsea’s first EFL Cup in three years.

Manchester City have been in terrific form lately and they already beat Chelsea at Wembley a few months back during the Community Shield. City are undoubtedly heavy favorites to retain the EFL Cup on Sunday.

Watch & bet on games via live streaming online on the internet? Unibet and bet365 offer stream och bets on the best European football from many different leagues via live streaming. Here we will give you all info about stream, betting, tv and team news for Chelsea Manchester City online!. Watch & bet!

Chelsea – Manchester City odds winner – (1 x 2) – who will win according to the odds?

This is the fourth time Manchester City will play Chelsea within seven months. So far, City have won two out of the previous three matches. Manchester City have been in terrific form lately and have some of the best footballers in the world in their squad. Most importantly, they have been very consistent lately. Hence, they are heavy favorites to win. However, Chelsea also have some pretty remarkable players in their squad and can certainly not be written off. They have gained some confidence after their win against Malmo and have certainly learned from their mistakes against City on February 9. So who will lift their 6th Carabao Cup titleon Sunday? Will it be Manchester City or will Maurizio Sarri win his first trophy as a manager?

Chelsea can face a major blow as goalkeeper Kepa might miss out due to a hamstring injury. However, the most expensive keeper in the world might still make the match. Kepa is the only injury worry Chelsea have. Chelsea should have their regulars like Hazard, Kepa, Kante,Willian and Higuain. Chelsea have dealt a major bad news as the club have received a transfer ban from FIFA today.

Manchester City have some injury worries in Gabriel Jesus and John Stones. Both are crucial players for City and their absence will be a big blow for the team. However, they have the likes of Ederson, De Bruyne, Silva, Sterling and Aguero.

Who will win Chelsea Manchester City? If you are looking to bet on this game, then there are several markets which are interesting. For example, a win for Manchester City has odds of 5.85 since they are the favourites.

If you think about put a bet on Manchester United or Chelsea there are several good promotions. Especially Unibet and bet365! Combine the best betting offers from Unibet and bet365 to get the most from your betting.

Here you see the standings in the Premier League. It’s updated after every game. Chelsea are currently 6th in the table while Manchester City are 1st.

This is the H2H – head-to-head stats between Manchester United and Chelsea.

Sunday’s match will be the 163rd match between Chelsea and Manchester City. So far, Chelsea lead the head-to-head with 67 wins while City have won 56 matches. The other 39 matches have ended in a draw.

Here we will give you answer on the most frequently asked question about Chelsea – Manchester City.

Ballack: Van Dijk should be happy he is not playing against Drogba

Ballack: Van Dijk should be happy he is not playing against...