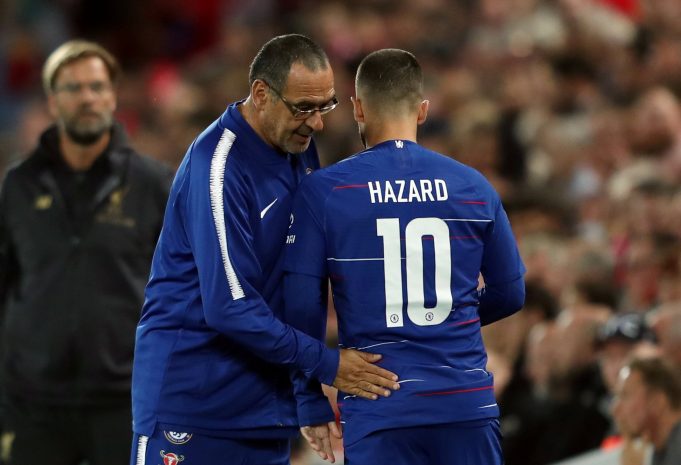 Chelsea boss Maurizio Sarri said that the club is willing to immediately offer Eden Hazard a new contract and it’s up to him to sign or reject it.

Eden Hazard has been a talismanic figure in Chelsea’s squad for the past couple of years now. He is currently at the peak of his powers and has done brilliantly for Chelsea this season so far.

Hazard’s current Chelsea contract expires in 2020 and he hasn’t signed a new contract with the club yet.

There has been a lot of talk about Hazard’s future at Chelsea since the World Cup. The Belgian said on a number of occasions that he wants the dream move to Real Madrid. However, he decided to stay at Chelsea unlike his Belgium teammate Thibaut Courtois.

Even now, Hazard has made it clear that he is confused between staying at Chelsea and moving to Real Madrid.

Talking ahead of Chelsea’s match against Wolves, when asked if Hazard will sign a new deal at Chelsea, Sarri replied, “The club is available to sign a new contract immediately, but it’s up to him if he wants to renew or not. I want Eden here, of course, but I want him here if he wants to stay here.

I know very well that there are discussions between the club and the manager of Eden every week, I think. So if there is something new, the club will call me immediately.”

Hazard will hope to put in a good performance tonight when Chelsea take on Wolves at the Molineux Stadium.