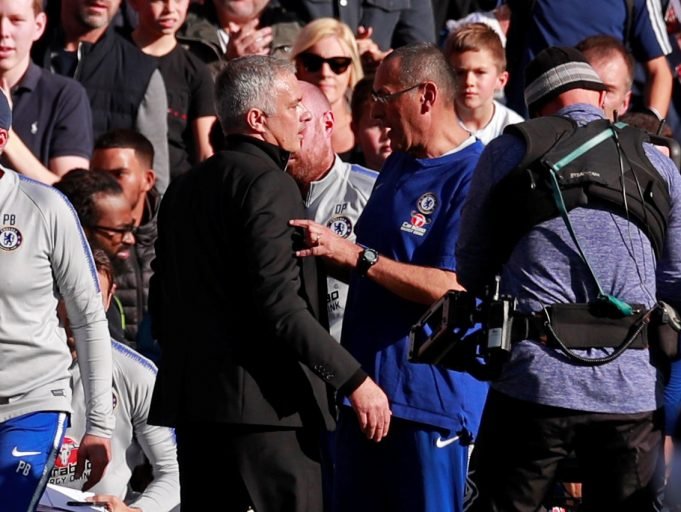 Chelsea manager Maurizio Sarri has said that Chelsea fans should respect Mourinho because of his achievements at the club.

Manchester United came agonisingly short of a win at Stamford Bridge on Saturday after courtesy of a last-gasp equaliser from Ross Barkley.

After Barkley found the net, the Chelsea dugout erupted and everyone was celebrating. However, Chelsea’s assistant coach Marco Ianni decided to celebrate in front of Mourinho which left the Portuguese livid. He went to confront Ianni but by that team, the Chelsea staff intervened.

Following the match, Chelsea fans were abusing Mourinho who responded simply by showing three fingers- the number of Premier League titles he won at Chelsea.

Following the match, Maurizio Sarri said that Chelsea fans should respect Mourinho because of his contributions to the club. He said, “Yes. Mourinho here has won and so I think that we need to respect him and to respect everybody who has won a trophy for the club.”

After the match, Mourinho said that Ianni apologised to him and he accepted his apology.

Chelsea are now third in the Premier League table while Manchester United are 10th. Both teams now play their European competition fixtures this week.