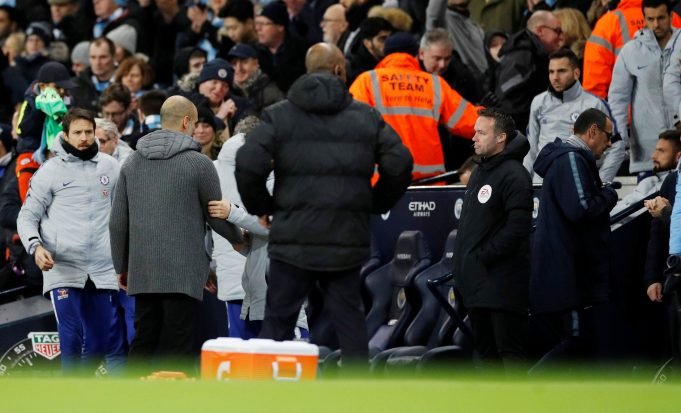 Chelsea manager Maurizio Sarri has revealed why he did not shake Pep Guardiola’s hands after their 6-0 loss against Manchester City in the Premier League. After the match was over, it was seen that Pep was walking towards the Chelsea gaffer to exchange pleasantries but Sarri avoided making any contact with the City manager and just headed towards the tunnel. Guardiola spoke with Gianfranco Zola and left the stadium.

However, the Italian finally revealed the reason behind his strange behaviour at the post-match conference. He said, “I didn’t see at that moment.”

Sarri added, “But of course as usually I will go to say hello to him later, as usual. It was by chance because I wanted to go to the dressing room at that moment, and I didn’t see him. I don’t have a problem with Pep.”

Chelsea were absolutely decimated by the hosts as they scored six goals in the match with Sergio Aguero notching up a hat-trick while Raheem Sterling scored a brace. Ilkay Gundogan scored one goal as well.

Speaking about his side’s performance, Sarri said, “I’m surprised because at the beginning of the season we played better away than at home so I don’t know what has happened but at the moment we are in trouble. In the last three or four matches we were without a reaction from the first difficulty so we need to understand.”

He concluded, “It is difficult to describe our performance, it’s difficult also to understand. We started well but after four minutes we conceded a goal in a stupid way.”

SEE ALSO: Sarri Must Bring In These Two Players To Turn Things Around: Marcotti