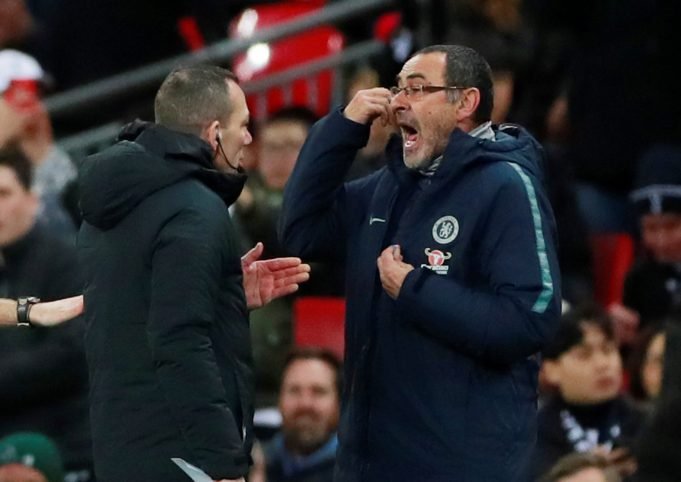 Chelsea boss Maurizio Sarri believes that Spurs star Harry Kane was offside when Kepa fouled him. VAR intervened and found Kane onside and awarded Tottenham a penalty. Kane converted the penalty and that turned out to be the deciding goal of the game.

Spurs now have a huge advantage ahead of the second leg at Stamford Bridge on the 22nd.

However, Chelsea’s footage of the incident showed that Kane was offside. Sarri believes that the referees should study VAR more carefully.

Sarri said, “I saw the video from our camera a few minutes ago, it was offside. Our camera was in line with Kane, and it was offside, but it’s not important. With the head, it’s offside. But it’s not important. It was important that the linesman stopped the run, he didn’t follow the ball, so he had a big influence on our defenders, and at the moment I think the English referees aren’t able to use the system.

In Italy there is VAR, in the first period it was a disaster, difficult for the referee to use the system. At the moment here the refs are not ready to use it in the right way. Kane was offside, clearly offside, but it is not important.

They need to study better the system. It is very strange in the Premier League there is not this system and then in Carabao Cup there is.”

Even though his team lost, Sarri praised their performance. He said, “I think we played very well, very well, with a great level of application and determination. We played against a very good team but defended very, very well. We played 70 balls in the opposing box, for Tottenham only 10 balls.

We had 17, 18 shots, nine on target I think. We played really very well. In this moment for us it is not easy to score, but I am really very happy with my players for this match.”

The former Napoli manager also said that Bayern Munich target Callum Hudson-Odoi is improving. He said, “In the last week he has been very normal. I see him every day in training and he behaved normal. He is improving. In the last game he played very well, and also today a very good match. He played like a player of 25, 26 years I think. A very good match with application and a very good defensive phase. But he was completely normal this week. Maybe he doesn’t read anything!”