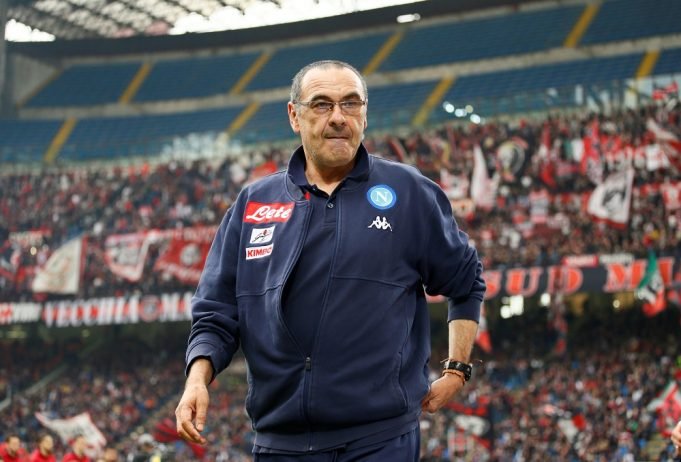 Antonio Conte took over the charge of Chelsea in the summer of 2016 and won the Premier League title on his debut season. But the Blue’s title defense haven’t gone according to their plan as they have finished fifth and will miss the Champions League next season.

Napoli’s manager Maurizio Sarri has been linked to replace Conte next season and the speculations further intensified when the Italian giants announced Carlo Ancelotti as their new manager leaving him free to join the Premier League giants.

The 59 year old has done a great job since he took over the charge of Ciucciarelli and  lost the Serie A title to Juventus by very small margins this season.

Sarri is planning to raid Napoli for up to four players if he takes the reins at Chelsea, reports the Evening Standard. He wants them to sign them in order to strengthen the squad for next season.

He wants right-back Elseid Hysaj, midfielder Piotr Zielinski, defenders Raul Albiol and Kalidou Koulibaly to move with him to England.

Koulibaly has improved a lot this season under the Italian and established himself as one of the best defenders in the world. The Fa Cup champions have been interested in him over the past couple of transfer windows and again could move for him this summer.

Hysaj has already earned plenty of attention from top European clubs this season after his outstanding performances in the right back position. The 24 year old could be a solid replacement for  Davide Zappacosta, who has struggled since his arrival in England and has a release clause worth £44 million.

Zielenski has been one of the stars of the club’s fine Serie A campaign this season, scoring seven goals in all competitions for the club. The midfielder is known for his good technique and high intensity play and have a release clause worth £57 million.

Albiol has also been in great form this season and could provide the required leadership and experience to them. He has a release clause of just  £5.2 million.

Sarri is still under contract with Napoli and wants Chelsea to pay his release clause of £7 million.