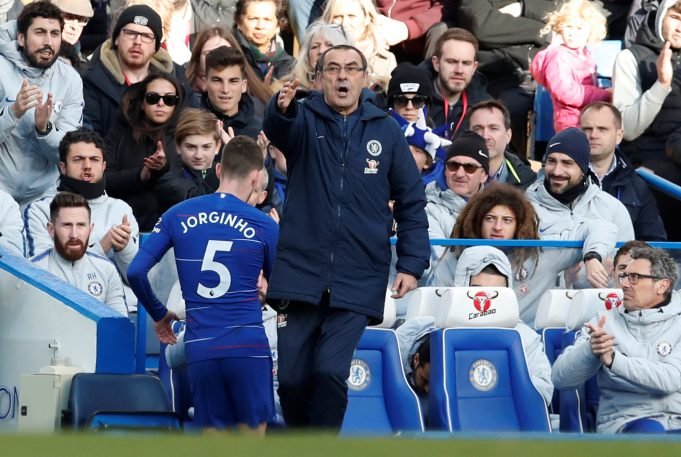 Chelsea manager Maurizio Sarri has insisted that Jorginho’s teammates were the reason behind his lacklustre performance against Wolves. The Blues snatched a draw from the jaws of defeat against the West Midlands club as talisman Eden Hazard scored from a long-range shot to give his side a point. The Wolves had taken the lead earlier in the match with Raul Jimenez putting the ball in the back of the net to get his side ahead. Italian midfielder Jorginho had yet another bad day at the office but the manager has denied to blame it on the player.

Speaking in the post-match press conference, Sarri said, “If the other players don’t move without the ball, Jorginho is in trouble.”

He added, “He is very able to play with one touch, but if you want to play one-touch football you need movements from the other players. Then, for the last 20 minutes, Jorginho is not suitable for a 4-2-3-1, so (taking him off) was a consequence of changing system, not the performance. I know him very well – he can get in trouble if the rest of the team is not moving.”

Sarri also lavished praise on the defensive midfielder as he hit back at the fans who have been criticising the Italian by saying, “He is a very strong character and a professional player. He has to play in every condition.”

SEE ALSO: Sarri says his team have learnt their lesson against Wolves