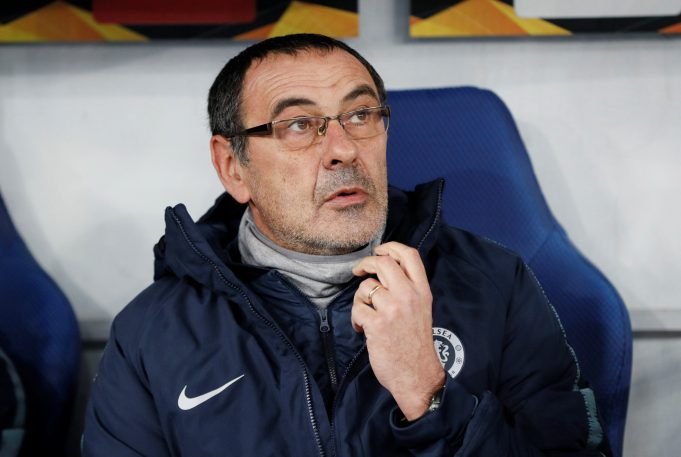 Chelsea manager Maurizio Sarri feels that his side are still lacking cutting edge. The Blues confirmed their place in the quarter-finals of the Europa League by thrashing Dynamo Kiev 5-0 in Kiev thanks to a hat-trick by Olivier Giroud. Chelsea will be up against Slavia Prague in the quarter-finals.

Following the match against Dynam Kiev, Sarri said, “We played very well [against Dynamo], especially because we started very well. First of all, in terms of solidity, I think. We can concede fewer than before. We are consistent with the results.”

Sarri still believes that his team’s attack can improve. The Italian said, “Not at the moment with the performances, especially in the offensive phase. Sometimes we’ve played with very good quality in the offensive phase, and sometimes not. But at this moment, for us, the most important thing is to be solid.

I changed [Chelsea’s system] in the last match because the opponent didn’t come to attack. And so, in the last 20 minutes, we could make the change. But I think that the system is not so important. What is important is our way of football. We don’t play in the same way with another system. Before changing, it’s better to consolidate the first system, to consolidate our way of football. Then we can change, also, in matches. But first of all, I want to see my football. We started to defend in a very good way in the last month, I think.

Now we need to start in the offensive phase to play every match with the same ideas. At the moment, we are not able to do this because, sometimes, we are without movement without the ball. Sometimes we didn’t put the ball into the box very well or attack the spaces behind the opponents’ back-line very well. So we need to have consistency on this.”

After sealing their place in the Europa League quarter-finals, Chelsea travel to Merseyside to face Everton tomorrow.