Ryan Giggs has suggested the kind of transfers Chelsea needs to carry out next season.

Chelsea signed Hakim Ziyech and Timo Werner this year, making them top contenders for the Premier League title next season.

“I watched a lot of his games last year at Derby and his team played exciting football, obviously just missed out on going up,” Giggs told Premier League Productions.

However, there are still transfers the Blues need to make to actually win the title. We agree here with Giggs – Chelsea needs to update their defensive side urgently, now that they have a strong attacking and midfield arena.

You can’t go throughout a season thinking you can score more goals than the other [team].

“But what a first season at Chelsea and of course he’s got next week to look forward to, top four, FA Cup if they do win it.

Giggs also is rather impressed with how Lampard finished his first season as a manager at Stamford Bridge. 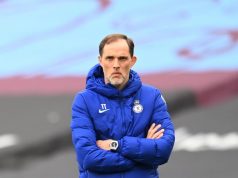