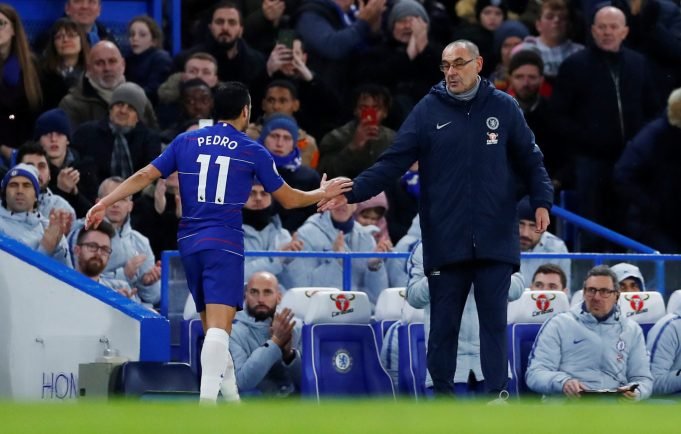 Chelsea winger Pedro believes that he is at the best form in his Chelsea career and has thanked club manager Maurizio Sarri for that.

Pedro has been in really good form for Chelsea this season. He has made 37 appearances for the club, scoring 8 goals and providing three assists.

So far, Pedro’s best season with Chelsea was under Antonio Conte in 2016-17 where he scored 13 goals and provided 12 assists in 43 appearances.

However, the Spaniard feels that he hasn’t been in any better form throughout his career. Pedro said, “It’s probably the best form I’ve been in. Maurizio is very clear with his ideas and that’s good for me because I run, press high and recover the ball. I stay close to the target to score goals and help my team — that’s good. I speak with him a lot about my role on the pitch and I’m comfortable playing high, and I like it.”

After some lackluster performances, Chelsea seem to be back on the right track and have a good chance of finishing in the top four of the Premier League this season. Pedro has credited Chelsea’s recent improvement to his team’s mentality.

The Spaniard said, “We said ‘this is enough’. I spoke during the week about the situation [with my team-mates], but now we’re all focusing on reaching the top four. It’s the most important thing for us until the end, to try to win every game. They’re all finals because it’s so important to get points, try to win every game and if not, it’s going to be so difficult to qualify.”

Chelsea’s next match is against Dynamo Kyiv tomorrow night at Stamford Bridge. The Blues will hope to put up a fine performance so that they can enter the second leg at Kyiv next Thursday with more confidence.