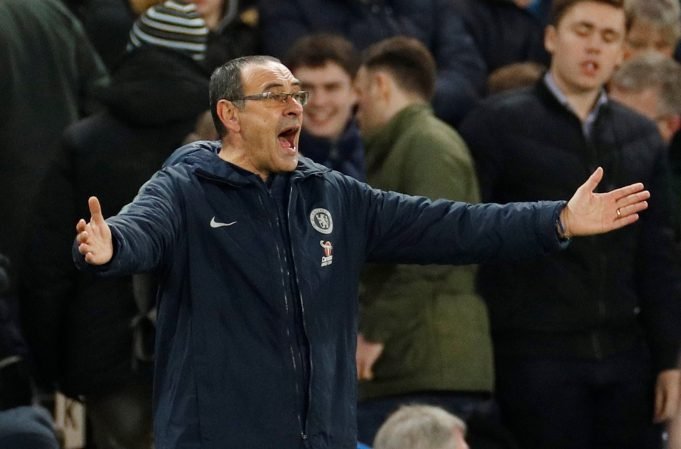 Chelsea exited from the FA Cup following a 0-2 defeat to Manchester United at home last night. This puts Sarri’s job in serious jeopardy.

Merson believes that Sarri should change his game plan at Chelsea if they are to register good results. He said, “Chelsea haven’t got the money to do what Pep Guardiola did at Manchester City, to say: ‘My full-backs aren’t good enough so I’m going to pay £50m for one, £50m for another one.’ As a Chelsea fan, it looks lazy to me. ‘I was manager at Napoli, Jorginho was good for me, I’m going to buy Jorginho. I need a forward, Higuain scored a load of goals for me.’

People are saying he was successful [at Napoli], he’s never won anything in the game. Yeah, he got more points at Napoli, I’ve never played for a team in my entire life where we’d be happy winning nothing but getting more points. You play to win.

I can’t wait until Sunday. Not as a Chelsea fan thinking: ‘We could win here,’ I just want to see what he’s going to do. He tried to go toe-to-toe, tried to press Man City, and it’s hard to do that because the goalkeeper is so comfortable on the ball, so when you try to squeeze, it doesn’t work.

What’s he going to do on Sunday? Please don’t tell me he’s going to do that again at Wembley. Now I hope he’s going to sit back, say: ‘Let’s soak this up.’ I can’t wait to see how he sets up. If we play the same way, we’re going to get the same result, and it won’t be far off six!”