Former Chelsea player Pat Nevin has had his take on Liverpool vs Chelsea. This is what he had to say.

“The game was always going to be among the most difficult of the season. Liverpool are flying at the moment and they played at a tempo that few could have lived with. We buckled for that three-minute spell at the start of the second half and although Eden had two fabulous opportunities afterwards that he would usually slot away with his eyes shut, Liverpool were the dominant team and deserved the points in the end.”

“It was interesting when the team sheets arrived beforehand to see Maurizio Sarri go with his most radical tactical change once again. Eden playing through the middle as centre-forward has its positives and its negatives so it was always a risk. Against Manchester City in the Carabao Cup it worked very well, as it has done on a number of other occasions, even long before Maurizio was at the club.”

“Defenders sometimes do not know how to deal with the Belgian and if he can turn and can run at the defenders in the box, we all know how devastating he can be. He is also our top scorer and on top of that it allows the opportunity to give Callum Hudson-Odoi an opportunity to test himself against a top side with real international class players, which he hasn’t done very often in his career so far.”

“Fortunately, all is not lost in terms of the season, though clearly we have to go on another run of wins now. This Thursday night was always going to be an important game against Slavia Prague but the loss to Liverpool has added a little more spice to the evening, because we all know it might now be the most likely route to Champions League football next season. They were a very energetic side in the first leg and not afraid to be physical too, so the 1-0 cushion is a god-send. Actually, it is less like a comfy cushion and more like a sliver of a pillow at a cheap hotel, because if we lose an early goal, that could lead to a seriously uncomfortable 90 minutes.” 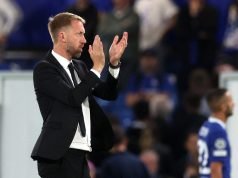