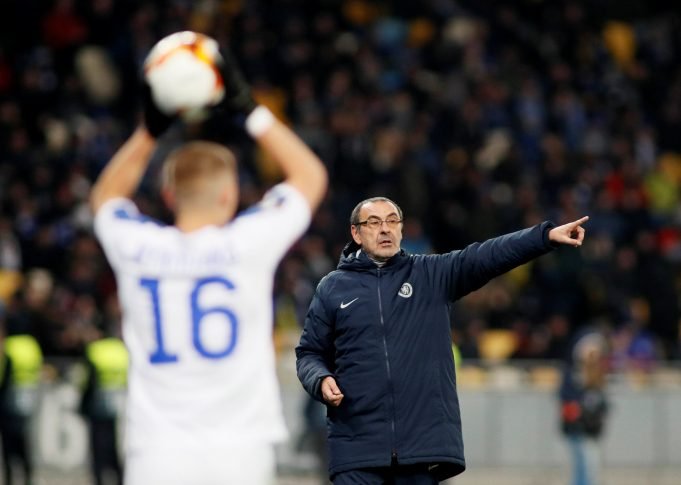 Maurizio Sarri revealed to us the club he wants to avoid in the Europa League until the very end of the competition.

His Chelsea side managed a 5-0 scoreline against Dynamo Kiev on Thursday to progress convincingly onto the Quarterfinal stage. The Blues absolutely demolished the Ukranian team by going past them 8-0 on aggregate.

Sarri’s former club, SSC Napoli fired him last summer after his failure to win the Serie A competition. Spending 3 seasons with the Italian side and turning them into real title contenders was the 60-year-old’s biggest accomplishment with them.

However, we all wait for the Quarterfinal draws, Sarri has no intentions of facing his former team this early in the competition.

Napoli, who are managed by Sarri’s compatriot, Carlo Ancelotti went past Red Bull Salzburg with an aggregate score of 4-3.

He further added, “It would be difficult to play them with my history with the club.”

The draws for the Quarterfinals and the Semifinals of the Europa League will be made on Friday. There are no regulations over countries as Chelsea could potentially even face their local rivals, Arsenal in the competition.

See Also: Sarri not worried about Hazard’s future at Chelsea

5 Players who retired at Chelsea