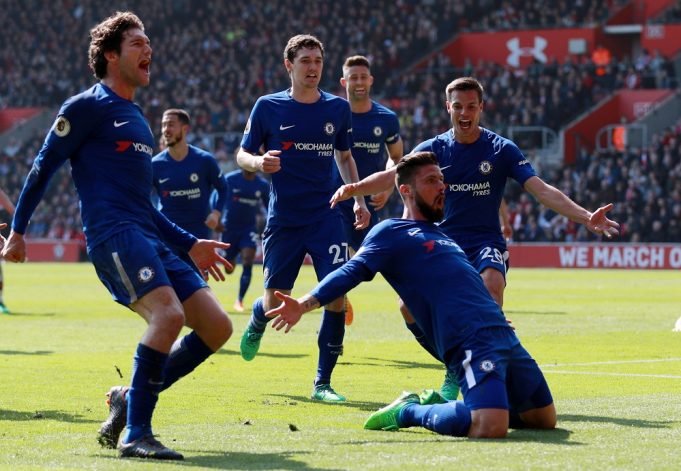 Giroud was instrumental in Chelsea’s 3-2 win

With Chelsea 10 points adrift of Champions League qualification, match against Southampton on Saturday was a must win game for them in order to push for the top 4 spot.

But Chelsea were trailing 2-0 after 60 minutes and it was looking like they would succumb to an embarrassing loss to Mark Hughes’ side. Then Antonio Conte brought Giroud in place of Morata and that decision paid off.

Chelsea turned around the game by scoring 3 goals in 10 minutes, Giroud with a brace and Hazard scored another.

The Frenchman was delighted to score first goal for the Blues in the Premier League and admitted that he was keen to prove a point.

“Yeah, obviously I was waiting for it – I tried so many times to put the ball in the back of the net,” Giroud told Sky Sports.

“When you are a striker, you must keep going. I really wanted the team to bounce back in the second half. The beginning was not what we wanted or expected but in football, you always have the opportunity to bounce back.

When then asked if he felt he had something to prove to his critics, Giroud replied: “Yeah. I used to say football is an everlasting, new beginning. You must always push yourself.

“The most important thing is to show some character. I have been through difficulties in my career, other times I tried to come back stronger. And it happened today.

“The second goal… the most important thing is even if you concede one or two you never give up.

“I’m very proud of what we did today.

“When I came on, I said to Eden to keep believing. I didn’t tell him we were going to score, but I believed after the first goal we scored. It’s very nice for the team.”

Chelsea are now 7 points behind Tottenham, after they were defeated by Manchester City. They will again face Southampton in the FA Cup semi-finals in the coming weekend, the only chance of them winning a silverware this season.