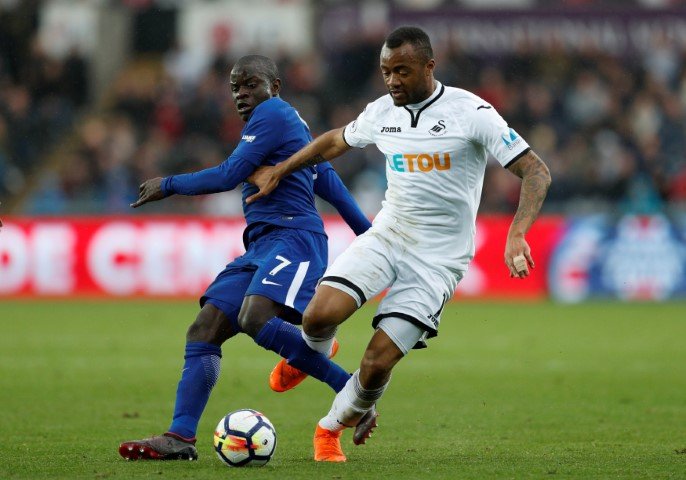 N’Golo Kante was a major addition to the squad for the 2016/17 season, signing a five-year contract for Chelsea.

Kante joined from Leicester City, where he so memorably played a major part in the Foxes’ Premier League triumph the previous season. The then 25-year-old came close to adding to that success on the international stage soon after. He was part of the France squad that was denied a host-team triumph at Euro 2016 by an extra-time Portugal goal in the final.

He arrived at Chelsea with a Premier League winners’ medal and eight international caps to his name, and was selected for the first game of the 2015/16 season, a win at home to West Ham.

Picking up where he had left off at Leicester, Kante was a mainstay of Antonio Conte’s team in the first half of the campaign, memorably scoring the fourth and final goal in a big win over Manchester United in October 2016.

A match that typified his energy and contribution was an away draw at Anfield in January 2017 when he won a remarkable 14 tackles out of the 16 he went in for. The next best player the statistic that night won three.

He scored again against Manchester United at Stamford Bridge, this time netting the only goal of the game in an FA Cup quarter-final in March, and followed that up a month later by being named PFA Player of the Year, as voted by his fellow professionals. It was widely acclaimed throughout the game as a thoroughly deserved honour and another one followed soon after when he was named 2017 Footballer of the Year by the Football Writers’ Association, becoming the 18th player in history to win both awards in the same season.

He scored what proved to be the winner at his former club near the start of the 2017/18 season and his importance was only emphasised when he missed a month in autumn with an injury suffered on international duty.

On his return and after some struggles, he helped the team achieve an impressive home win over Manchester United.

Kante’s performances in the second half of the season remained at a high level even when the team occasionally struggled around him. He was one of our star men in both legs of the Champions League last 16 tie against Barcelona, especially impressing in Camp Nou, and played a key role as we reached the FA Cup final.

Before the Wembley showpiece, Kante’s performances during 2017/18 were recognised by the Chelsea supporters who voted him their Player of the Year. He then ended the season in the best possible fashion, shining in midfield yet again as we shut out Man United to secure the FA Cup, the first of Kante’s career.

This season he has been pushed up to a more advanced attacking midfield role by new boss Sarri.

Kante had been playing for French Ligue 1 side Caen before he was scouted by Leicester City and head scout Steve Walsh. The midfielder made an instant impact at the Foxes as he helped them to win the Premier League title.

Chelsea midfielder N’Golo Kante is quite possibly the best defensive midfielder on the planet. The guy is just a super human. The little Frenchman makes up for his lack of size by being an absolute beast at defending. Kante is one of the best at interceptions, tackles and runninng. The man can just run all day. As they say, 70% of the Earth is covered by water and the rest is covered by N’Golo Kante.

So here we will look at the best defensive skills by N’Golo Kante at Chelsea. Check out the best N’Golo tackles videos here.

Some of the tackles in this video are insane! How did N”Golo Kante do that? These videos show the best N’Golo Kante tackles!

Kante has had a good 2017/18 season. Despite only winning the FA Cup, Kante has still been one of the best players in the Premier League this season.

From 47 appearances this season for Chelsea, N’Golo Kante has made a stunning average of 3.4 tackles per-game. Additionally, he has made 2.5 interceptions per-game and has a pass success rate of 89.1% (Whoscored).

Kante is also number one on our Top five Chelsea players who made the most tackles in 2017/18. His 3.4 tackles per-game is well above any other Chelsea player.

Footballer of the Year 2017- France

N’Golo Kante’s market value is £54 million according to TransferMarkt which is surprisingly low. Especially when you remmeber that players like Virgil Van Dijk was sold for £75 million and Paul Pogba to Manchester United for £90 million.

N’Golo Kante has made 22 appearances for the France national team.

Top five Chelsea players back from loan this summer 2018