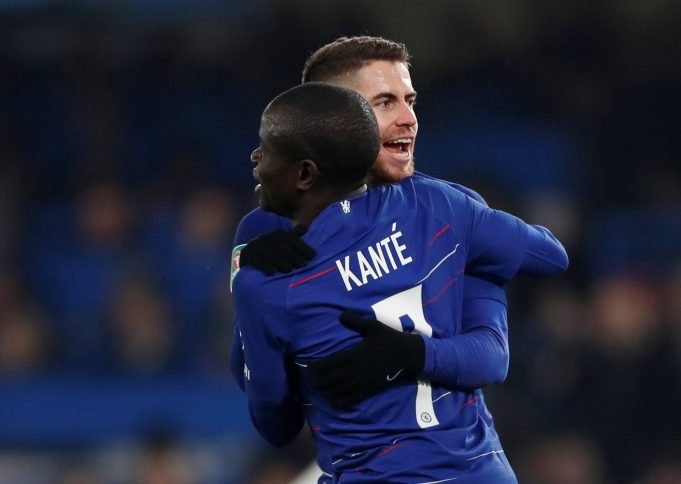 Chelsea star N’Golo Kante has defended his teammate Jorginho, saying that the Italian is an important midfielder for the club.

Jorginho who joined Chelsea last summer has come under heavy criticism lately with many blaming him for Chelsea’s recent slump. Chelsea fans booed the midfielder when he came on as a substitute in the club’s Europa League fixture against Malmo FF.

However, N’Golo Kante has defended Jorginho while also saying that he is enjoying playing in a different role under Maurizio Sarri.

The Frenchman said, “It’s fine, it’s fine. I like this position. I’m with the manager and I’m enjoying the way I’m playing now. Jorginho came this season. He is doing very well. He knows very well the philosophy of the manager. He is very important for us at the club.

I’m enjoying participating more in the offensive positions to change the game.”

About the boos Jorginho received from Chelsea fans on Thursday, Kante said, “We can understand their disappointment in our performances in some moments of the season. I think we all want to get tighter and we will all be together for the final and the rest of the season. As a team we have some difficulty at the moment but we are all together.”

After being thrashed 6-0 by Manchester City, Chelsea face Pep Guardiola’s side again, this time in the Carabao Cup Final tomorrow. Chelsea did defeat City 2-0 at Stamford Bridge and Kante believes his side can replicate that performance tomorrow.

About the match, Kante said, “They are not unbeatable. We need to go with a lot of hope and to prepare for the game in the best way. After our last result against Man City, it was difficult to accept the defeat. At Chelsea we are not used to that.

At the end we cannot change it. We need to accept it and go forward and do better. That’s what we try to do. It is most important to win this one title in this game. It is what we will try to do, what we will prepare to do and hopefully we can do it.”