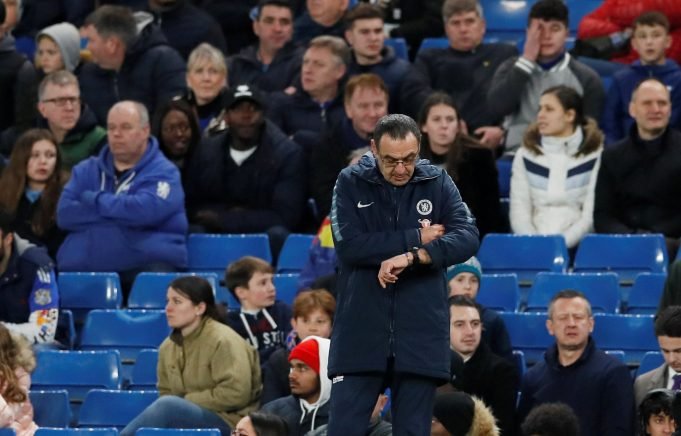 According to reports, Chelsea manager Maurizio Sarri will be sacked if Chelsea lose Sunday’s Carabao Cup final to Manchester City.

Chelsea’s performances have suffered a massive dip lately as they have now fallen to 6th place in the Premier League table. Their FA Cup hopes have also ended after their defeat to Manchester United at Stamford Bridge.

Chelsea haven’t won the League Cup since the 2014-15 season and it won’t be easy this time either as their opponents in the final is none other than Manchester City who thrashed them 6-0 not long back.

The Carabao Cup final could be a perfect make or break match for Chelsea and Maurizio Sarri. Provided Chelsea win, Sarri’s job will surely be safe for a while at least because more than winning a trophy, Chelsea shall have beaten Manchester City.

However, if Chelsea lose, there’s no doubt that the club’s fans will boo Sarri. Chelsea’s board is reportedly already looking for replacements for Sarri.

However, provided Chelsea defy the odds to beat Manchester City on Sunday, Sarri may just be able to make a point to Chelsea’s board and the fans.

Who will become next permanent Chelsea Manager? Here are the next Chelsea manager odds: