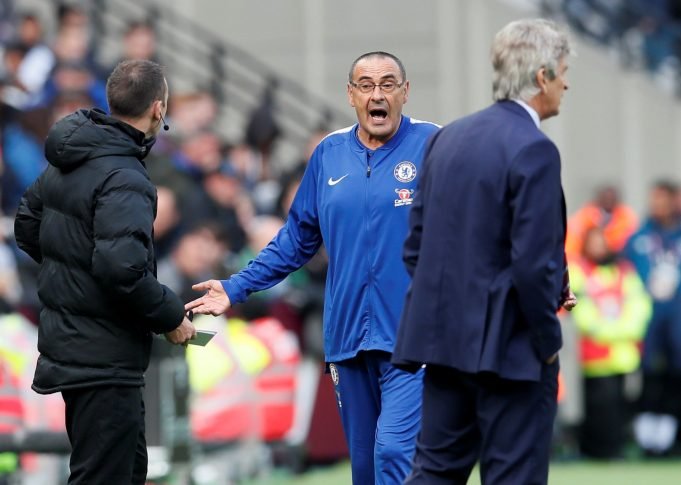 Maurizio Sarri has received support from West Ham United manager Manuel Pellegrini as the latter has advised the Italian manager to keep believing in his philosophy.

Sarri’s execution policy of his system has been an issue. The Blues had a perfect start to their season but they have crumbled to the added pressure and the Italian manager’s strategy is attracting questions every time his side comes on the pitch.

Despite strong defiance, Chelsea have managed to put a strong show in the last few matches and with Arsenal losing against Everton their top four hopes have suddenly brightened.

Pellegrini said, “It is more hard when you don’t obtain the results that you want. Players will trust it if they see that by playing that way you win.

“As a manager, you must be used to that pressure, but you must continue doing what you believe is the best way to win a game, before the game and during the game.

“After that, personally, when I don’t win the game I make a self-criticism about the mistakes.

“If you are always feeling you must change something because the pressure will be too high? I don’t think you can be a top manager.

“Maurizio is just starting his first season here in England. It is not easy to come to the Premier League, you must know a lot of things.

“He is maybe part of the reason they were playing very well and now that they have a couple of bad results you cannot not trust in all that he is doing.

“He is a very good manager. He demonstrated that at another team so I hope that he will finish this season in a good position for Chelsea. “Chelsea in this moment are close to the spot of Champions League for next season. Maybe they are not involved in the title but they continue fighting for the Europa League and they reached the final of the League Cup.”